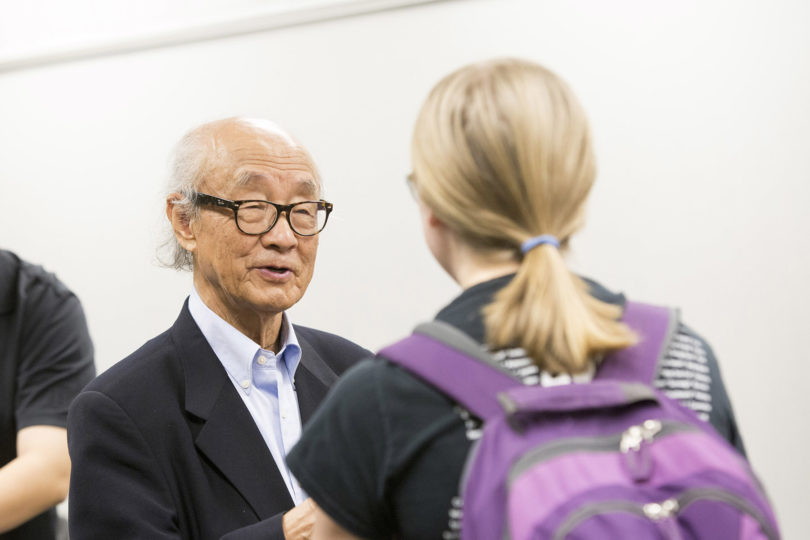 Accomplished professor, thought leader to retire after 45 years at UGA

Han S. Park, a pre-eminent scholar on global peace and a thought leader on the tense relationship between the U.S. and North Korea, retires at the end of the year after 45 years at UGA.

While many people on the cusp of retirement plan to travel and relax, Park already is thinking about how to continue his decades-long effort to promote peace.

“Retirement won’t stop me from pursuing my research and being an activist for peace,” he said.

Park is the founding director of UGA’s Center for the Study of Global Issues, which fosters educational and research activities focused on economic, political and sociocultural change and development occurring at the global level. His work as a peace scholar and activist has made Park a respected international arbitrator and humanitarian.

His efforts have helped raise the profile of UGA’s School of Public and International Affairs and the university itself, said Markus Crepaz, a professor and head of SPIA’s international affairs department.

“Dr. Han Park, over his long career, has not only remained a deeply inquisitive scholar but has become a public intellectual, concerned about the moral and humanitarian dimensions of his teachings,” Crepaz said.

Born in China, Park is the son of Korean immigrant parents. His early years were shaped by two civil wars, first in China when the Communists rose to power. After Park’s family moved back to Korea, he saw the devastation caused by the Korean War.

“From early childhood, I have been puzzled by the question of why people kill each other,” Park said. “That’s why I became obsessed with peace. I thought someone like me must do something about it.”

Park joined the UGA faculty in 1970. It was during the height of Vietnam War protests and the continued struggle for civil rights in the South. At that time, it was a bold decision for the Korean national to come to Dixie. Park said it was about making the biggest impact.

“I wanted to play a part in globalizing the South,” he said.

When he came to Athens, he found early on that people didn’t treat him like a threat, instead he was regarded as a guest and treated with Southern hospitality.

As a peace scholar, Park was frustrated with the existing paradigm that considers peace an absence of conflict. In that philosophy, the strategy for peace is one of reactive conflict resolution. Park has challenged this notion.

Rather than resolving conflict, peacemakers foster harmony through diversity, not by building superior military strength.

“America’s true strength is its ability to accommodate different perspectives,” Park said. “Because of those perspectives, America is uniquely positioned as a peacemaker.”

Of course, those are strengths of Park’s as well. His origins in China and Korea coupled with his Western education have allowed him to become a trusted mediator between the U.S. and North Korea. Park played a role in de-escalating several conflicts between North Korea and the U.S. and its ally South Korea.

In 2009 when two U.S. journalists, Laura Ling and Eunna Lee, were detained in North Korea and sentenced to 12 years of hard labor, Park worked behind the scenes. His efforts resulted in former-President Bill Clinton’s visit to Pyongyang and the ensuing release of the journalists.

Park also has been pushing both the U.S. and North Korea to better understand each other.

After his retirement, Park plans to continue work with Uniting Families, an organization he founded with the late Dean Rusk to reunite family members separated by geopolitical forces. He also is working to establish the Consortium for Peace and Sustainability with other universities such as Georgia State and Emory.

When asked what he will miss most when he retires, Park doesn’t hesitate.

“Students,” he said. “It’s unreal to think about not standing in front of a class of ­students.”

Park said he has enjoyed the privilege of influencing students “directly or indirectly about diverse views of peace.”

In his final semester, he has taught an upper-level, undergraduate course on peace studies. He plans to continue to teach this course in some capacity either at UGA or in classrooms around the world.

As the semester draws to a close, Park has looked back on his time at UGA to assess his impact. Certainly, there is no shortage of praise from colleagues and administrators.

“Dr. Park’s long and distinguished career at the University of Georgia has reflected his deep commitment to peace and the promotion of a global community,” said SPIA Dean Stephanie Lindquist. “At SPIA, we are grateful for his service and dedication to our students and our scholarly enterprise.”

However, Park is more modest about his impact. Looking at his efforts to help students better understand the world around them and help globalize Georgia and the South, Park said, “I like to think I helped a little.”

Perhaps it’s that downplaying of his accomplishments that is driving Park to work for peace even in retirement.