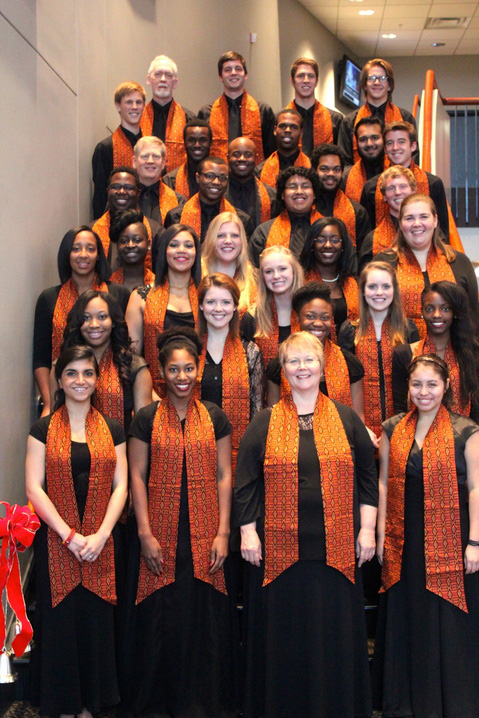 The UGA African American Choral Ensemble is celebrating its 25th anniversary with a concert April 12.

The UGA African American Choral Ensemble will celebrate its 25th anniversary April 12 with a special reunion concert in Hugh Hodgson Concert Hall at 7 p.m. The performance is open free to the public.

“There is a lot to celebrate at this concert,” said Gregory Broughton, AACE director and associate professor of music at the Hugh Hodgson School of Music. “Some outstanding leaders and musicians have come out of this group.”

AACE originally was founded by UGA students in 1972 as the Pamoja Singers, named after a Swahili word for “together.” Two years later, the program spawned the Pamoja Dance Company, another student organization that celebrates its 40th anniversary this year.

“The students at the time wanted to have something they could call their own, and they accomplished it handily,” Broughton said. “I wanted to build upon the strong foundation the members had established while at the same time making the ensemble more inclusive, performing not only gospel and show tunes but also spirituals and African-American art song as well.”

In February 1989, the newly renamed African American Choral Ensemble emerged not only as a course offering at the Hodgson School but also as an ensemble that invited the entire university community to participate. A quarter-century later, AACE is still going strong, performing at the 2011 Georgia Music Educators Association conference, the Smithsonian Institute’s 2013 “Southern Harmonies” Traveling Exhibition and, most recently, at the 2014 Organization of American Kodály Educators.

The April 12 reunion concert will feature popular spirituals and gospel repertoire drawn from the past 25 years as well as arrangements by Broughton himself. Special guests are expected to attend, and several of AACE’s founding members have been invited to work with the ensemble prior to the performance.

“It’s exciting to see alumni rehearsing the ensemble, because I can remember seeing their strong leadership abilities emerging all those years ago,” Broughton said. “These were some of the students who’d take the reins if I had to step out of class for a minute, or if I was running late, and a lot of them still use those skills today as professional musicians. It’s inspiring to work with them again.”