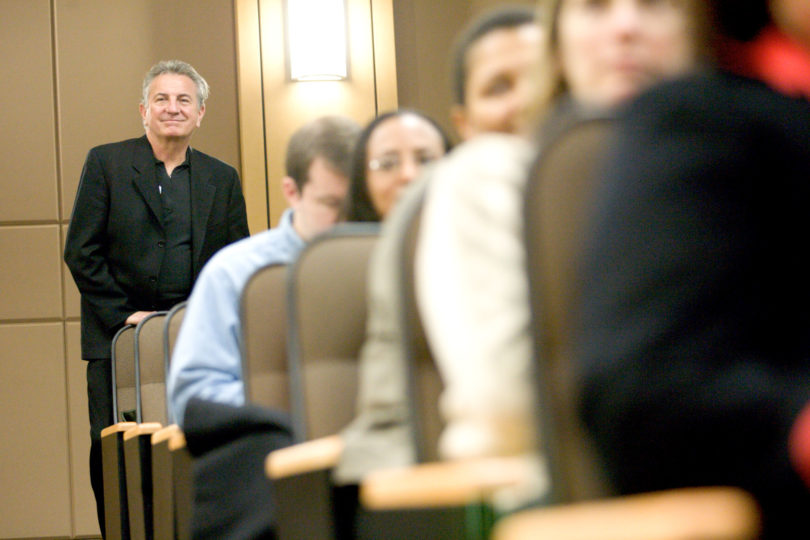 Charles Figley listens while volunteers discuss their feelings about their work with Hurricane Katrina evacuees.

In the critical situations that washed over the country following Hurricane Katrina, people at evacuee shelters took on one of two roles: victim or helper. But, as some members of the Athens Crisis Response Team found out, too often those roles merged.

As volunteers toil for long hours in cramped conditions, feelings of burnout and frustration can run high, according to Charles Figley, a psychologist, family therapist and professor in the College of Social Work at Florida State University.

Figley and his wife, Kathy, were the keynote speakers at a recent university function to thank the 96 volunteers who took care of about 600 evacuees at Rock Eagle in Eatonton.

The Figleys spoke about what they called “compassion fatigue,”  which is a result of the stress accumulation that often accompanies caring for victims of tragedy.

“You need to remember to take care of yourself in these situations. It’s vital,” Charles Figley says.

It’s a premise that goes ignored too often, according to Jerry Gale, director of the Marriage and Family Therapy Program at UGA.

“It comes at a cost. Several of our volunteers gave up things. Those in private practice gave up money, some gave up social events and took time from their families,” he says.

The Figleys call this “the thorn.” It represents the harsh return that can come with giving of one’s self during crises. People in empathetic positions can internalize part of the trauma that touched the victims without realizing it, Charles Figley says. Add to that dealing with piles of red tape and making little or no money, and it can add up to harmful effects.

Responders often report feeling useless, sleeping too much or too little and taking out their bad feelings on family members. People who’ve been harmed in the crisis often attempt to cast blame somewhere, and volunteers can be easy targets.

Amos Zeichner, director of the Psychology Clinic and ACRT member, says the blame could easily shift between government bodies and volunteers.

“As long as you were there as a person helping another person, people were very thankful. The moment you took on the role of ‘The Establishment,’ because they were not appreciative of organization A, B or C, people were not thankful,” he says.

While the Figleys spoke, the group began to open up, exchanging humorous, touching and reverent stories about their two-week time caring for evacuees.

“The closest I came to compassion fatigue is when I would go home at night,” says Kimberly Kolat, a graduate student in social work who volunteered at the shelter for about five days. “I couldn’t stop thinking about what else I could do.”

Kolat isn’t married, but some volunteers with spouses said bringing their work home with them made for unpleasant situations.

“When we leave to be with our families and try to do the things we normally do it can be difficult because we’ve changed. We’ve changed because we’ve experienced (traumatic) mentality all day, ” Kathy Figley says.

But while the toll can be exacting, the rewards can be great.

Rick King, who headed the ACRT, worked 12-hour days, packed on weight and soaked up stress like a sponge. Still, he says, the benefits outbalance his waistline.

King told a story about an old man he met at the shelter who spoke almost no English.

One day the man handed King a card with a woman’s named on it. He pointed to the name and tried to shape his mouth around the word “daughter.”

King took the card and made some calls, leaving his name and cell phone number with various people and organizations.

A few days later his phone rang on his way home from the shelter. A young woman told King she was the evacuee’s niece. The man’s wife had died earlier in the year, and he had vowed to fight out the storm at home by himself, she said.

The man’s daughter, a member of the U.S. Merchant Marines, had negotiated time off to go back to New Orleans and search for her dad’s body.

While she was headed there, King got in touch with her and delivered the good news.

“I had to pull the car over, not because I was on the cell phone but because I started crying,” King says.

His fellow volunteers and the Figleys applauded the story and smiled through their tears. Sometimes the good parts of volunteer work are contagious too.