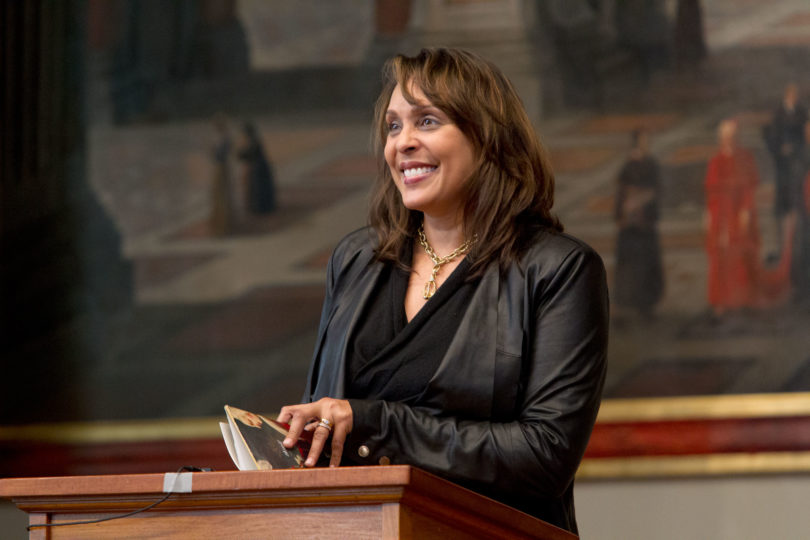 In a reading that was at once graceful and unsettling, poet laureate and UGA alumna Natasha Trethewey delivered the Charter Lecture to a standing room audience in the Chapel on Nov. 8.

Through her readings sprinkled with commentary, the 2007 Pulitzer Prize poetry winner shared some deeply personal thoughts about her biracial identity and her journey as a writer.

Trethewey, who earned a degree from the Franklin College of Arts and Sciences in 1989, is now a celebrated author and English and creative writing professor at Emory University.

This year she was named Poet Laureate for the Library of Congress.

Provost Jere W. Morehead noted in his introduction to the lecture that while many poet laureates serve in the role at the twilights of their careers, Trethewey was named for the position while still in her prime.

She has written several poetry books including Thrall, which was released this year and was the source of her Charter Lecture readings.

As Morehead alluded to in his introduction, the Charter Lecture series feature speakers who can reach out to the broader university community with ideas that are important to a free society. Trethewey’s lecture was also part of the university’s inaugural Spotlight on the Arts at UGA festival.

For the audience, Trethewey offered something intimate and universal.

Describing her objectives in writing Thrall, Trethewey said, “I try to make sense of our shared history, what we’ve all learned from the past as well as my personal history from my black mother and white father­-a story that is quintessentially American.”

Also a poet, Trethewey’s father is a professor at Hollins University in Virginia. Trethewey’s mother was murdered in 1985.

One of the poems read by Trethewey is a frustrating work titled “Help, 1968.”

The poem reflects on a Robert Frank photograph of a black maid carrying a white infant. In the poem, Trethewey reflects back on a year as a child that she spent alone with her mother when her father was “at sea.”

Light-skinned as a child, Trethewey reveals that when her mother brought her into town, she often was mistaken by neighbors as her daughter’s maid. When she corrected them and told them she was Trethewey’s mother, they offered her money in a show of pity.

“Now, I think of the betrayals of flesh,” Trethewey read, “How she (my mother) must have tried to make of her face an inscrutable mask and hold it there as they made their small offerings, pressing coins into my hands. How like the woman in the photograph she must have seemed, carrying me each day,white in her arms, as if she were a prop, a black backdrop, the dark foil in this American story.”

Trethewey describes the poems in the book as a conversation about a complicated relationship with her father.

“If you know that my father is still alive, you can imagine why this perhaps is the most difficult book I’ve had to write,” she said.

In reading from the poem “Enlightenment,” Trethewey recalls a trip to Thomas Jefferson’s Monticello with her father and their ongoing discussion about the nature of the Founding Father’s relationship with his slave and mistress, Sally Hemings, and the children they bore.

Trethewey describes how she and her father each identify differently with the troubling Jefferson-Hemings relationship-her father having defended Jefferson in the past. Trethewey appears fixated on his hypocrisy.

The poem ends describing a guided tour of the Jefferson estate.

Imagine stepping into the past,
our guide tells us then-and I can’t resist

whispering to my father, this is where
we split up. I’ll head around to the back.
When he laughs, I know he’s grateful

I’ve made a joke of it, this history
that links us­—white father, black daughter—
even as it renders us other to each other.