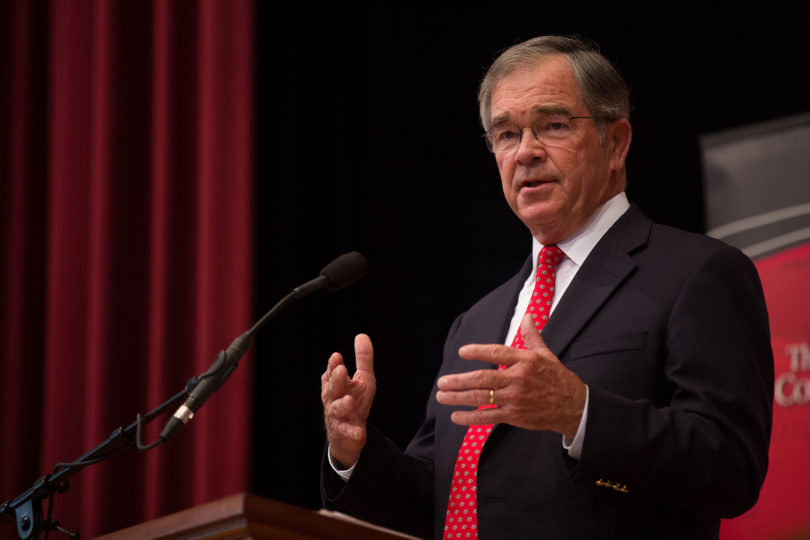 Promising to convey an unconventional approach to leadership

Promising to convey an unconventional approach to leadership, UGA alumnus and former Atlanta Olympics CEO Billy Payne told a packed Chapel audience at the Nov. 3 Mason Public Leadership Lecture that “the difference between leading and following isn’t all that clear.”

“It is, in my opinion, a mistake to always default to the criteria of leadership when describing someone’s capability, a mistake to assume that we must all rise to the top rung of the ladder to be successful,” said Payne, who serves as chairman of the Augusta National Golf Club, which hosts the Masters Tournament. “Often I think that following, not leading, is the key to a successful life. It can produce the greatest personal satisfaction and reward.”

Payne recounted how a talk with his wife, Martha, early in their marriage changed his view of success and reframed his approach to leadership. What she told him was devastating: You don’t have any friends; you’re just too competitive.

“I was making a mistake of always equating winning with leadership, and by doing so, sacrificing future successes that depended on the efforts, skills and collaborations of others,” he said. “My wife was right. Since that day I have tried to walk that line between being aggressive at times or surrendering to the leadership of others significantly more skilled than I am.”

Securing the 1996 Centennial Olympic Games in Atlanta could be traced back, Payne said, to that moment.

“I have now become certain that success and satisfaction in life come from sharing goals rather than from achieving individual goals,” he said.

The Mason Public Leadership Lecture is supported by a grant from Keith Mason, a lawyer and alumnus of the Terry College. It is part of the Terry Leadership Speaker Series presented by the college’s Institute for Leadership Advancement. The institute was established in 2001 to develop values-based, impact-driven leaders who serve their communities and organizations.