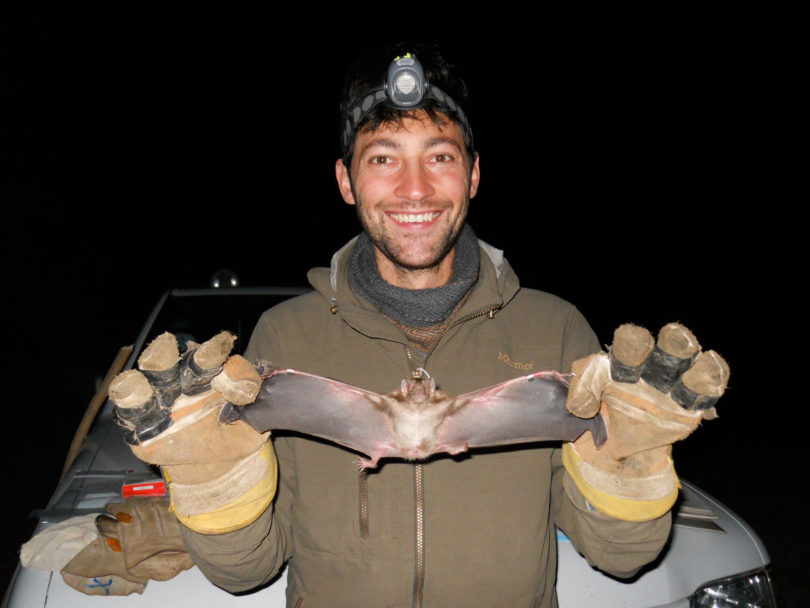 Athens, Ga. – Daniel Streicker, who received his Ph.D. in ecology from the University of Georgia in 2011, has been named the first grand prize winner of the new Science & SciLifeLab Prize for Young Scientists. The award was created by Science, a publication of the American Association for the Advancement of Science, and SciLifeLab, a center for molecular bioscience focused on health and the environment. Streicker will receive the prize, which includes a $25,000 honorarium, on Dec. 9 in Stockholm.

“The Science & SciLifeLab Prize award winners, who will be honored at the same time as the Nobel Prize winners, have made outstanding contributions to the field of science,” said Barbara Jasny, deputy editor for commentary at Science, who coordinated the three levels of judging that occurred for the competition. “These bright young scientists demonstrate that their novel ideas can forge new pathways and provide fresh perspectives with broad implications.”

A Research Fellow at the University of Glasgow, Scotland, Streicker studies the ecology and evolution of emerging infectious diseases. Working with rabies virus in bats, he explores questions about when, where and how viruses jump from one host species to another. His findings not only answer basic scientific questions but have real-world implications for public health, agriculture and wildlife conservation.

“Predicting the next wave of infectious diseases is of critical importance to the management of human, animal and environmental health,” said John Gittleman, dean of the UGA Odum School of Ecology. “Building on his extraordinary high-profile papers in Science, Proceedings of the National Academy of Sciences, PLoS Pathogens and Proceedings of the Royal Society B, Daniel has laid out a new agenda for how global disease research can and should be carried out. The Odum School is known as a center for the study of disease ecology, so it’s very gratifying that one of our own has not only won this prestigious award but is already leading a profoundly important scientific field.”

Many of the infectious diseases that threaten human health, such as SARS, Ebola and West Nile virus, originate in other species. Understanding how and why such diseases are able to become established in new host species is critical if future outbreaks are to be predicted, controlled and prevented-the ultimate goal of Streicker’s work.

Describing his research in an essay in Science, Streicker said that the complex nature of infectious disease emergence means that no single scientific discipline can adequately explain it. That is why his work in the field and the laboratory combines elements of ecology, evolutionary biology, population genetics and mathematical modeling. The essay is available online at http://www.sciencemag.org/content/342/6163/1185.full?sid=cfe8d3e1-78bb-4e93-9482-db19943cebf6.

For one study, he looked at how ecological traits, such as overlap in host species range or ecological niche-commonly thought to be major predictors of such jumps-affected the rate at which rabies jumped from one bat species to another. He also sequenced DNA from hundreds of infected bats to quantify their evolutionary relatedness.

“The questions Daniel wanted to address required pulling together hundreds of rabies samples from more than 20 different bat species from all across North America and sequencing their RNA,” said Sonia Altizer, associate dean of the UGA Odum School of Ecology and Streicker’s doctoral adviser. “And a lot of the computational methods he needed to analyze the data didn’t exist. He had to develop those methods himself.”

He found that, contrary to expectations for a rapidly evolving virus like rabies, genetic similarity between host species played a larger role than range overlap in determining whether transmission was likely to occur between species and whether rabies would establish long-term transmission cycles in the new host species.

Streicker has also worked with public health and agriculture officials in Peru, where rabies spread by vampire bats infects humans and livestock. Over four years he sampled regularly for rabies at bat colonies across the country, using statistical and mathematical models to analyze the resulting data. He found that reducing the number of bats in a colony-a common control strategy-did nothing to reduce rabies exposures in bats, and in fact may have been counterproductive: Levels of rabies exposure were higher in colonies where bats had been culled than in those that were left alone.

Altizer said that Streicker’s contributions go beyond his research findings, significant as they are. “He collaborates extremely well with people,” she said. “He’s generous with his time and gifted at helping people think through problems related to their research. He’s had a large impact on the community of ecologists here at UGA; he’s helped us take our science to a higher level.”

Streicker will continue his work in Peru. Among other things, he will explore how better understanding of the dynamics of infectious disease transmission across species may lead to science-based disease control policies.

“My particular field of research, how infectious diseases jump between species, is a complex, fascinating and tremendously important problem,” Streicker said. “Solutions require scientists with broad training who are excited to collaborate across scientific disciplinary boundaries. The Science & SciLifeLab Prize is a tremendous honor and I hope it will inspire other young scientists to infuse ecological and evolutionary thinking into the topic of emerging infectious diseases.”