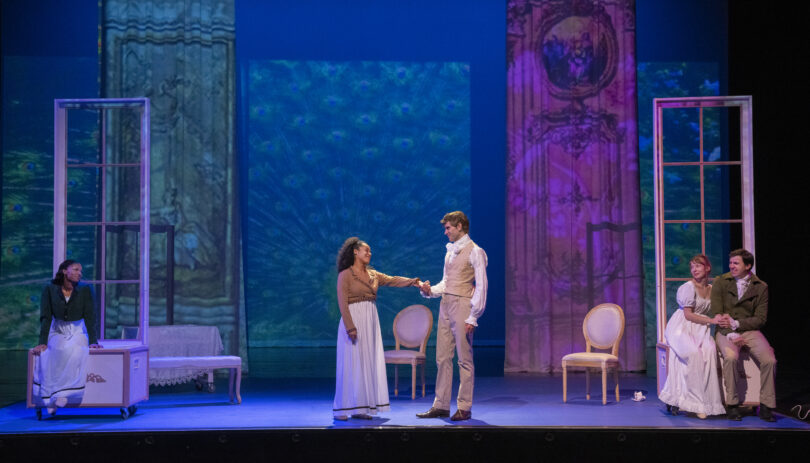 On Jan. 27 at 7:30 p.m. at UGA’s Fine Arts Theatre, the forward-looking Aquila Theatre Company will bring the novel to life in an adaptation by the performers themselves.

Six actors play 15 different people over the course of the evening. As the Bennet sisters try to navigate their way toward love and marriage, Austen humorously skewers the hypocrisies and absurdities of the English class system, and puts the thoughts and feelings of her women characters front and center. Filled with unforgettable personalities, this sharp social satire has it all: wit, romance and lots of dancing.

Aquila Theatre Company was founded in London by Peter Meineck in 1991 with a production of Aeschylus’s Agamemnon at the Bridge Lane Theatre in London before touring in the United States to a few universities. The company, along with its founder, moved to the United States in 1994, and in 1998, Aquila Theatre became a U.S.-based nonprofit theatre company. It went on to build up an extensive international touring circuit while becoming an established part of the New York City theatre scene with its productions of “Iliad: Book One” at the Clark Studio at Lincoln Center, followed by long-running off-Broadway productions of “Comedy of Errors” and “Much Ado About Nothing.” Aquila has also had the pleasure of working with the acclaimed Olympia Dukakis and Louis Zorich in its 2004 production of “Agamemnon.”

Aquila is now one of the foremost producers of classical theatre in the United States visiting 50 to 60 American cities per year with a program of two plays, workshops and educational programming, and is under the artistic directorship of Desiree Sanchez since 2012. The company has been awarded numerous grants from the National Endowment for the Arts, The National Endowment for the Humanities—from which it received a Chairman’s Special Award—the New York State Councils for the Arts and Humanities and the New York City Department of Cultural Affairs.

Aquila has performed at the White House under the Bush and Obama administrations and has performed for the U.S. Supreme Court and for the National Council on the Arts. Aquila was also recently invited by Lin-Manuel Miranda to perform at the U.S. Capitol in support of the National Endowment for the Humanities for its groundbreaking theatre and humanities program: The Warrior Chorus.