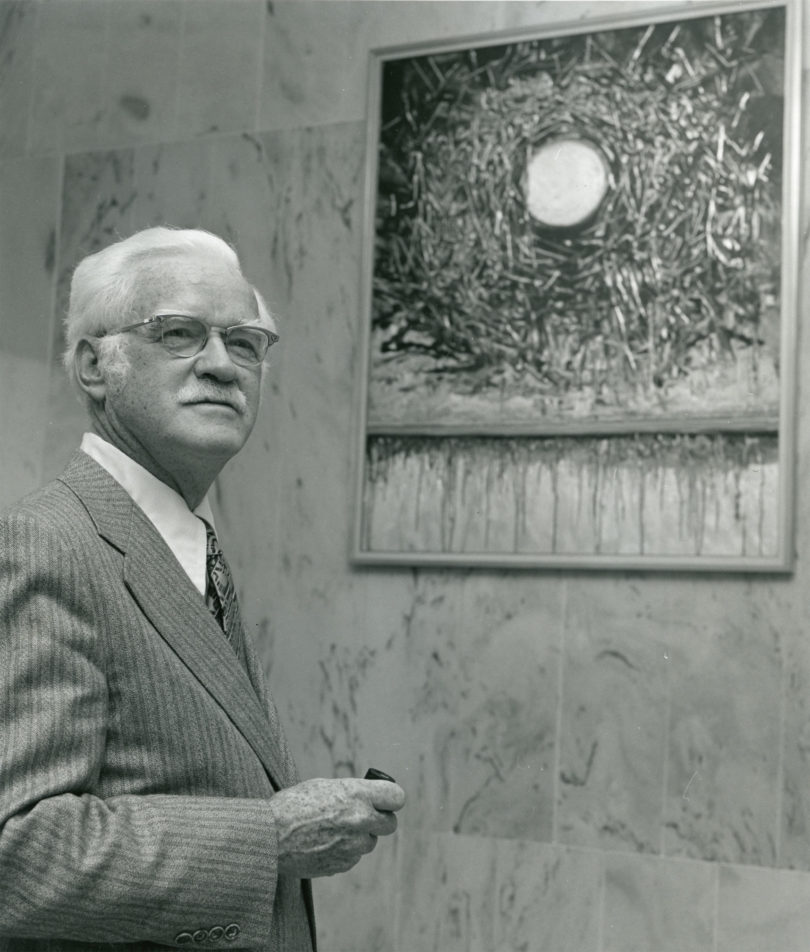 Athens, Ga. – “Artists at Work: Abbott Pattison and Lamar Dodd,” a program featuring archival footage and a panel discussion about two University of Georgia artists will be presented April 14 at 2 p.m. by the Georgia Museum of Art, the Lamar Dodd School of Art and the special collections libraries. The event will be held in the museum’s M. Smith Griffith Auditorium and the program is free and open to the public.

One film shows Abbott Pattison (1916-1999), a visiting sculpture professor in 1953, carving his sculpture “Mother and Child,” an abstract image in white marble still located outside the Fine Arts Building on Lumpkin Street. Pattison is best known for creating the Iron Horse sculpture. The other film shows Lamar Dodd (1909-1996), the head of the art department at UGA from 1937 to 1972, and his students on an episode of “Meet the Professor” in 1961.

“I wanted to use the preservation of our historic materials to highlight what is important in examining our past and celebrating those people who have spent some of their days on our campus,” said Margie Compton, a media archivist in the special collections libraries, who organized the event.

The silent footage of Pattison highlights his various sculpting methods while he worked on campus. The Office of General Extension shot four reels of Pattison working on his sculpture. One reel has been preserved under the 2011 National Film Preservation Foundation Grant.

Pattison created several larger-than-life, abstract sculptures while at the university in 1953 and 1954. His Iron Horse sculpture currently resides near Athens in a field off Highway 15 in Greene County, where it was relocated after students reacted to it with demonstrations against modern art.

The second film shows Dodd and six of his students on the ABC show “Meet the Professor.” The show featured Harold Taylor, former president of Sarah Lawrence College, interviewing educators and having them interact with their students. In Dodd’s episode, the students paint while he critiques their work.

Dodd is prominent in both films, which highlight the art of Athens and the university in the early 1950s and 1960s. Compton said the films were chosen in conjunction due to their connection to the campus and the different methods of art making seen in the films.

Dodd was an influential artist and leader at the university, unifying the art department and creating the master’s degree program. His paintings encompassed many styles, ranging from naturalism to abstraction.

“We are excited to collaborate with the University of Georgia special collections libraries and the Lamar Dodd School of Art to show this exceptional footage,” said Carissa DiCindio, the museum’s curator of education. “The panel discussion will give us the opportunity to learn more about the work of Abbott Pattison and the teaching methods of Lamar Dodd.”

The panel members for the screening include Compton, William Underwood Eiland, director of the Georgia Museum of Art; and Kinzey Branham, professor of art. Georgia Strange, a professor of art, will moderate the panel.

Museum Information
Partial support for the exhibitions and programs at the Georgia Museum of Art is provided by the Georgia Council for the Arts through appropriations of the Georgia General Assembly. The council is a partner agency of the National Endowment for the Arts. Individuals, foundations and corporations provide additional museum support through their gifts to the University of Georgia Foundation. The Georgia Museum of Art is located in the Performing and Visual Arts Complex on the East Campus of the University of Georgia. The address is 90 Carlton St., University of Georgia, Athens, Ga. 30602-6719. For more information, including hours, see www.georgiamuseum.org or call 706/542-GMOA (4662).