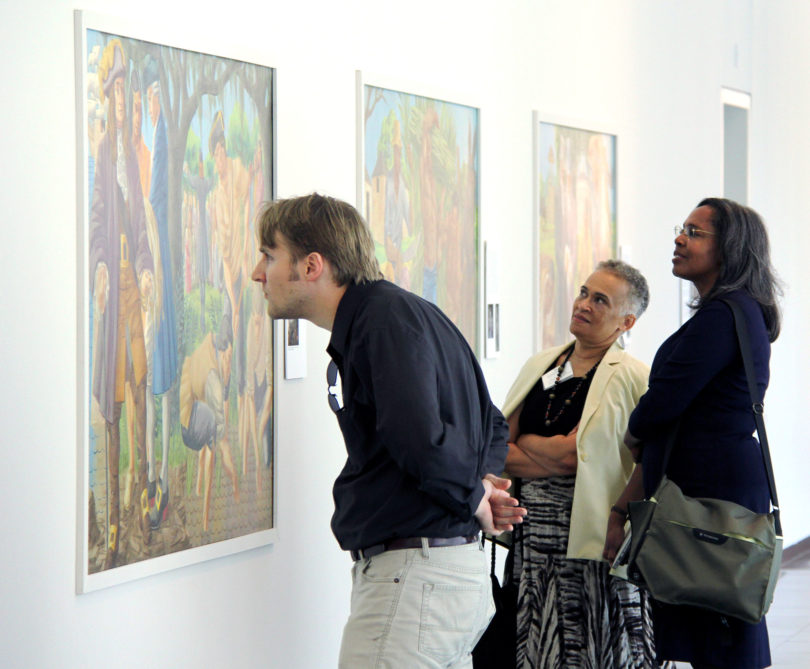 A collection of controversial paintings depicting the history of Georgia agriculture now hanging in the Georgia Museum of Art have become the centerpiece of a campus dialogue about art, history and diversity.

These four paintings, murals created in 1956 by artist George Beattie, include what many consider idealized images of slavery—rather than the inhumane realities—as well as sexualized depictions of Native Americans.

The murals adorned the walls of the Georgia Department of Agriculture building in Atlanta for more than 50 years before being removed because of their controversial nature in 2011.

Now owned by GMOA, the murals have been on display at UGA since August, raising eyebrows and prompting a complex discussion.

“We had to take these controversies head-on,” he said during a “Dialogue in Diversity” discussion about the paintings with faculty and staff on Oct. 12. “The good thing about an art museum—as opposed to state agriculture building—is that people are used to thinking about art in context.”

Beattie was commissioned to decorate the agriculture building upon its completion. He produced eight murals depicting Georgia agriculture. The four most controversial—and the ones now on display—deal with the state’s agricultural history from pre-colonial Native American agriculture up to pre-Civil War slavery.

There are number of reasons the paintings have been controversial since they first went up, according to Manoguerra.

The works depicting slavery veer toward a mythic approach rather than tackling harsh realities with images of shackles, beatings or malnutrition.

In another mural depicting pre-colonial agriculture, Native American women are depicted with bare breasts; the men in loin cloths. Another painting portraying James Oglethorpe’s arrival in Georgia relegates Native Americans into the background.

When freshman Brooke Culpepper first saw the murals when exploring the GMOA earlier this semester, she said she felt her reaction was “almost offended.”

But it also peaked her curiosity enough to attend the “Artful Conversation” program on Oct. 17. The event was an opportunity for students to talk about the paintings and ask questions.

Since the beginning of the exhibition, the GMOA has been asking different groups on campus to weigh-in on its significance and meaning.

“We needed other voices to talk about these murals,” Manoguerra said.

A spectrum of faculty and staff also got a chance to discuss the artwork at the “Dialogue in Diversity” event. Breaking into smaller groups, some talked about how they as educators could address the complexities posed by the murals with students and guests.

GMOA also has worked to engage museum guests and the community at-large about the paintings through a blog, http://beattieagmurals.blogspot.com, and the Twitter handle @agmurals.

“For those who aren’t used to tweeting but would like to express themselves in 140-character bursts, we have a book (at the museum), which allows them to write a tweet,” Manoguerra said. The museum communications staff will then post those comments online.

The paintings will be on display at GMOA until Jan. 6, when they will be put into storage.