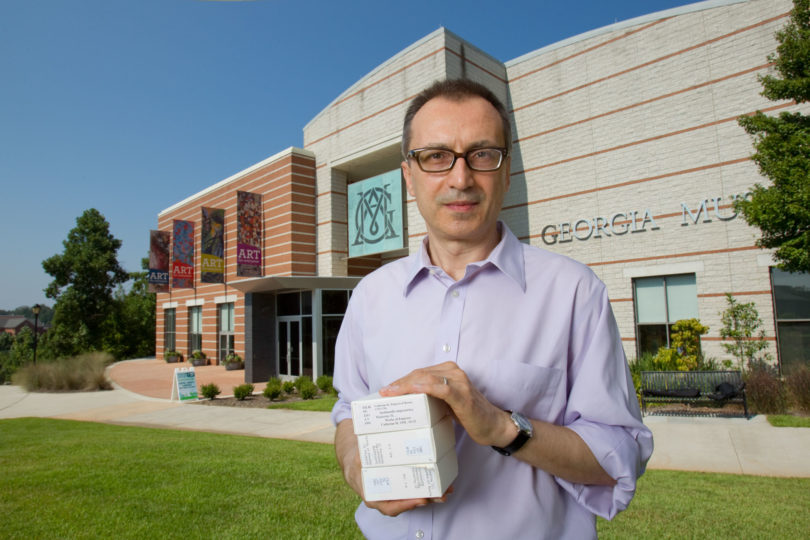 Art has the ability to tell stories through objects. The story of how a Lutheran princess became the most powerful Russian empress in history and how her journey uplifted a nation can be seen through her art collection, which is on display at the Georgia Museum of Art until Jan. 5.

“We have assembled a group of stunning objects of art to explain something essential about 18th-century culture, about the cultural connectivity of Catherine the Great as a philosopher, collector, patron of art and empress,” said Asen Kirin, associate professor of art history who curated the exhibition. “The show is about the dynamic between collecting historical art and commissioning new works of art. It is also about a person’s ability to invent and affirm a sense of cultural identity through works of art and intellectual pursuits.”

In conjunction with the exhibition, Kirin is organizing a two-day symposium Nov. 1-2 featuring noted scholars of Russian, Byzantine and French art.

“The symposium develops further some of the theme on which the exhibition touches upon-art collecting and imperial power, power and gender, the reception of the medieval/Byzantine cultural heritage in the era of the Enlightenment,” said Kirin, who will present a paper titled “The Guiding Gaze of the Enlightened Empress: The Architecture of Lookout Spaces.”

Kirin, who also is the associate director of UGA’s Lamar Dodd School of Art, has spent nearly 20 years studying Catherine the Great, both in his native Bulgaria and in Russia before coming to the U.S. to continue his study of ancient arts and architecture of the Eastern Roman Empire. He approached art museum Director William U. Eiland with the idea for the exhibition to share his research with the UGA community.

During his research, Kirin has been decoding the messages in Catherine’s collection, including the famous Wedgwood Green Frog Service, which is the most elaborate and expensive set ever commissioned.

Pieces from this iconic dinner set, along with others, will be featured in the exhibition Kirin assembled, Exuberance of Meaning: The Art Patronage of Catherine the Great (1762-1796).

“Her innumerable projects-whether a new city, a church, a liturgical vessel or a dinner set-were conceived in a manner allowing for multiple, yet complementary, interpretations covering a spectrum of meanings,” he said.

This exhibition features works of decorative art the Russian empress commissioned for her own use or as gifts for churches and courtiers.

According to Kirin, the Buch chalice, created by noted goldsmith Iver Winfeldt Buch and on loan from the Hillwood Museum and Gardens in Washington, D.C., serves as the centerpiece of the exhibition. It is a solid gold vessel adorned with scores of diamonds and eight cameos that Catherine the Great herself selected from her collection.

The show focuses on three realms: scholarship and intellectual pursuits, liturgical services and religious devotion, and the experience of dining. In each of these three sections, works of art enable certain forms of transcendence.

“They create the experience of overcoming the limitations of one’s physical existence in that place and moment,” he said. “In this context, the term transcendence is with regard to cultural anthropology as an elevating activity that enriches life and surpasses the sphere of maintaining basic human existence.”