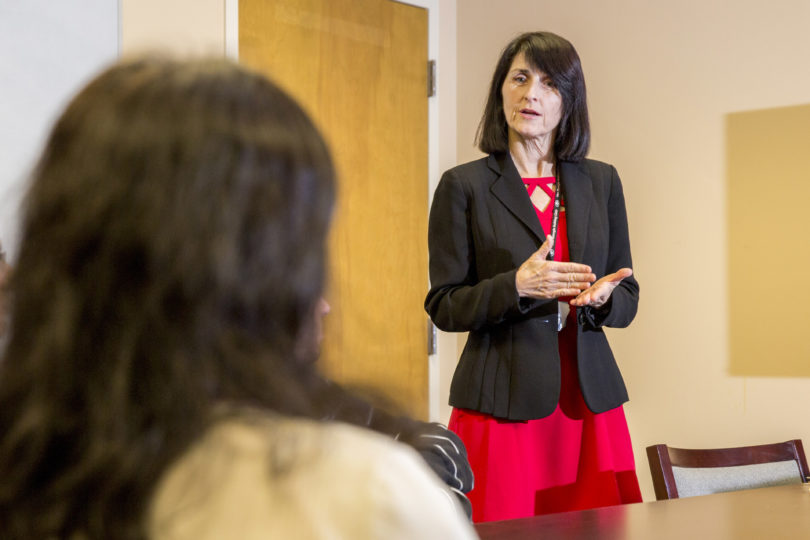 Susan Fagan has worked with her students to develop a model of the progressive memory loss that occurs following a stroke. (Photo by Dorothy Kozlowski) 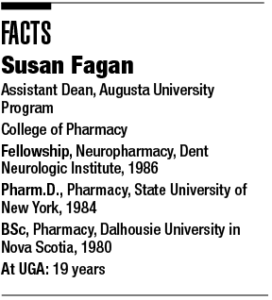 Susan Fagan has dedicated her life’s work to the treatment of stroke. Her commitment to scholarship, teaching and research of this significant health concern has earned her such prestigious titles as Distinguished Research Professor, the Albert W. Jowdy Professor and assistant dean at UGA’s College of Pharmacy’s campus in Augusta.

Sharing her enthusiasm for her research with students and colleagues is much more important than titles for this faculty member, however, who has been at UGA since 1999.

To appreciate Fagan’s passion for stroke, which is the fifth leading cause of death in the U.S., it is important to understand the causes and consequences of this disease. A stroke is a brain attack that occurs when blood flow to an area of the brain is cut off. When this happens, brain cells are deprived of oxygen and begin to die. When brain cells die during a stroke, abilities controlled by that area of the brain, such as memory and muscle control, are lost. People who experience a stroke may only have minor problems, such as temporary weakness of an arm or leg, but others may be permanently paralyzed on one side of their body, lose their ability to speak or suffer memory loss and dementia. While some people may recover from a stroke, more than two-thirds of survivors will have some type of disability. In fact, stroke is the leading cause of adult disability in the U.S., according to the National Stroke Association, which also reports that almost 800,000 people in the U.S. experience a new or recurrent stroke each year.

“Research has helped us to discover acute treatment modalities that allow us to reduce the disability due to stroke,” said Fagan. “In my lab, I work with graduate students, professional pharmacy students and residents to develop pharmacotherapies that will improve stroke outcomes, by regeneration of blood vessels for improved blood flow and protecting the vascular system
following strokes.”

It is her most recent research for which she currently is most excited.

Working with students in her research laboratory, Fagan has developed a model of the progressive memory loss that occurs following a stroke. Using C21, a drug compound from Sweden, the team has been successful in preventing cognitive impairment following stroke in laboratory rats without the harmful side effects of low blood pressure found in other similar drugs. Fagan hopes that her work can be translated to human models in the near future.  She has published three new studies this year related to this work, and she just received a five-year, $2 million National Institutes of Health grant  in collaboration with her colleague Adviye Ergul in Augusta University’s physiology department, to continue this work.

A staunch advocate for graduate and undergraduate students alike, Fagan has received numerous awards and accolades for her research expertise, and she has more than 200 professional publications. Along with her research, Fagan is committed to teaching tomorrow’s pharmacists with a valuable philosophy.

“I encourage my students to practice as a valued member of the interprofessional team, which will ultimately lead to improved patient outcomes,” Fagan said.