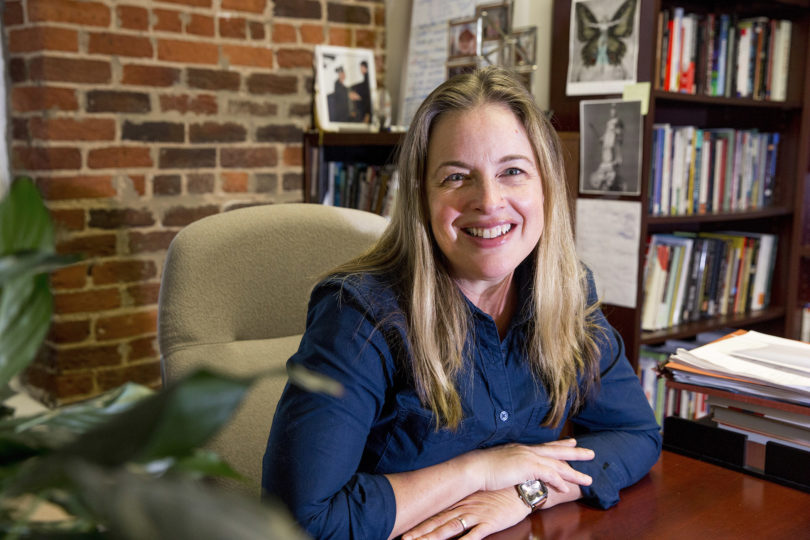 Mary Caplan knows what it’s like to be poor. As a child the Seattle-born researcher shuttled between two households—one wealthy and one that, in her words, “barely scraped by.”

The experience set the course for her life. After earning a degree in sociology, she worked for nearly a decade in low-income communities in the San Francisco Bay area, trying to help clients on a case-by-case basis. Then she met “a fantastic social worker” who motivated her to look at the underlying issues behind the problems she saw. She eventually earned a doctorate in social welfare to research poverty.

“The narrative is ‘If you just work hard enough, you should be able to do it,’ ” Caplan said. “I question that, because I see that there are people who are working very, very hard and they’re still not making it.”

These days Caplan teaches and conducts research in an area that many researchers have overlooked—how people use credit to make ends meet. She examines the way low-income individuals utilize informal, fringe and predatory financial services as well as how communities create safer, more inclusive alternatives. Among her observations, she’s noticed how the social aspects of lending impact the borrowing choices people make.

“One of the reasons people may prefer predatory lenders is that they tend to be nice,” she said. “People who walk into a title loan company report feeling respected and not judged.”

In contrast, she said, banks ask questions about resources and personal histories that people can find embarrassing or difficult to answer.

Her research is attracting interest in academia and beyond. She’s given invited presentations at international conferences, and a textbook that she contributed to has been translated into four languages and adopted in universities across China. She was also recently featured on the financial literacy website WalletHub.com and the Georgia Public Broadcasting radio program “On Second Thought.”

When not teaching or conducting research, Caplan volunteers with GLOBES, the campus organization for the lesbian, gay, bisexual, transgender and queer community. She currently is helping to assess the health service needs of transgender individuals in Athens and surrounding areas to create a guide of “safe space” health service providers. Her efforts reflect her view that poverty isn’t just a lack of income, but can be a lack of inclusion.

“Some people in this community go all the way to Atlanta for health services, because they feel they can’t trust local providers to give unbiased help,” Caplan said.

While Caplan seeks better alternatives for marginalized people, she also encourages her students to do the same through hands-on projects and research about the challenges those populations face.

Undergraduate Theresa Young is helping to design and implement one such project: a study of the relationship between poverty and shame. She first volunteered to help and later was awarded a research assistantship from the Center for Undergraduate Research Opportunities.

“Three things immediately drew me,” Young said. “First, I did not know anything about the research process and wanted to learn. Second, I have known for a long time that I wanted my career to involve the ostracized of society, and third, an opportunity to learn from her was something I did not want to pass up.”

Such comments from her students are not unusual. Caplan’s classes are popular, despite their reputation for requiring a lot of reading and writing. Doctoral students in particular face a daunting workload from her, yet last spring they voted her the School of Social Work’s Ph.D. Professor of the Year.

What Caplan takes special pleasure in, though, is seeing her students develop an interest in research. Currently she is working with six undergraduate and graduate students on various research projects about the lived reality of poverty.