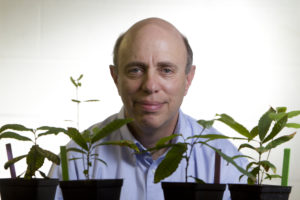 Scott Merkle, associate dean for research and professor in the Warnell School of Forestry and Natural Resources, was featured in a New York Times article about the American chestnut.

The tree helped build industrial America and was once among the country’s most important trees, but deadly fungi wiped out an estimated 3 billion of them more than 50 years ago.

Researchers have been working to revive the species by tinkering with nature. This could be especially encouraging for areas that have been hit the hardest by this loss.

“With the death of the chestnut,” historian Donald Davis wrote in 2005, “an entire world did die, eliminating subsistence practices that had been viable in the Appalachian Mountains for more than four centuries.”

Charles Maynard and William Powell are the researchers attached to the project, having killed many trees in the process of their studies.

“I’m the world’s leading authority on how to kill chestnut trees,” Maynard said.

Eventually, the researchers connected with Merkle, and Merkle taught Maynard how to grow chestnuts from embryos, the next developmental stage after pollination.