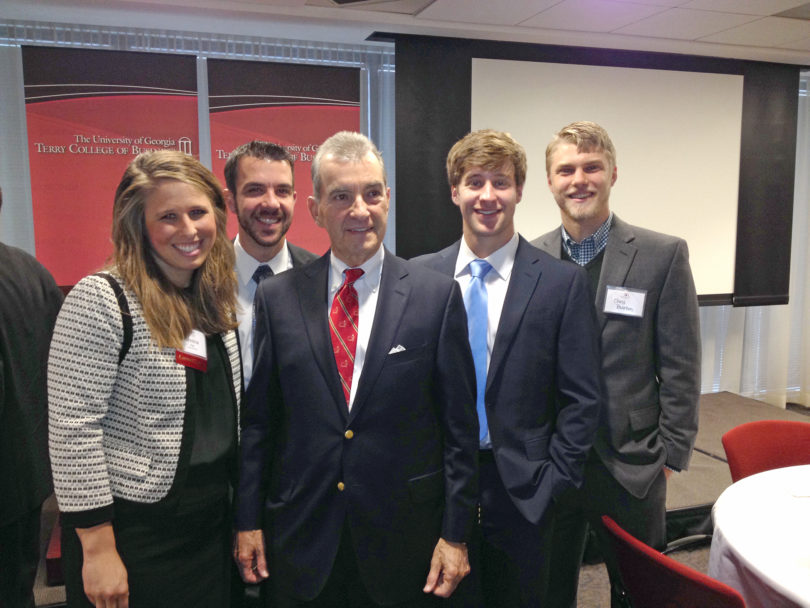 John Schuerholz visits with Terry College of Business students at a breakfast Nov. 21.

Atlanta, Ga. – Atlanta Braves President John Schuerholz talked about plans for a new baseball stadium in Cobb County and his thoughts on management at a University of Georgia Terry College of Business event this morning.

As part of the Terry Third Thursday speaker series, Scherholz talked to a packed audience at the Terry College’s Executive Education Center in Buckhead. Video and audio of the event can be found here.

“Ordinarily I would talk about the great legacy and the great record of your Atlanta Braves… but I don’t think many of you have those questions now,” Schuerholz said. “We’re still going to be known as the Atlanta Braves, we’re just going to move 12 miles up the road to a beautiful facility.”

Scheurholz talked about choosing the new destination, the problems with Turner Field and how the new Cobb County stadium will differ from its predecessor.

“Not only are we going to build the finest, world-class stadium ever constructed, but with it will be Phase I of our development, which will likely be restaurants, sports stores, maybe a small hotel or something like that,” he said. “It will be for fan interest and fan entertainment, a place where you can get there early, have a meal and then go to the game.”

Schuerholz was named president of the Atlanta Braves in 2007, having served for 26 years as a general manager in major league baseball (including 17 with Atlanta).

Under his leadership, the Braves have reached unprecedented levels of success by winning 14 consecutive division titles, five National League pennants and one World Series as well as compiling the best record in baseball over the 17 years from 1991 to 2007.

Terry Third Thursday is a breakfast speaker series for the Atlanta business community. This series features influential speakers, as well as special guests from the University of Georgia, who bring local and global perspectives on business and innovation.