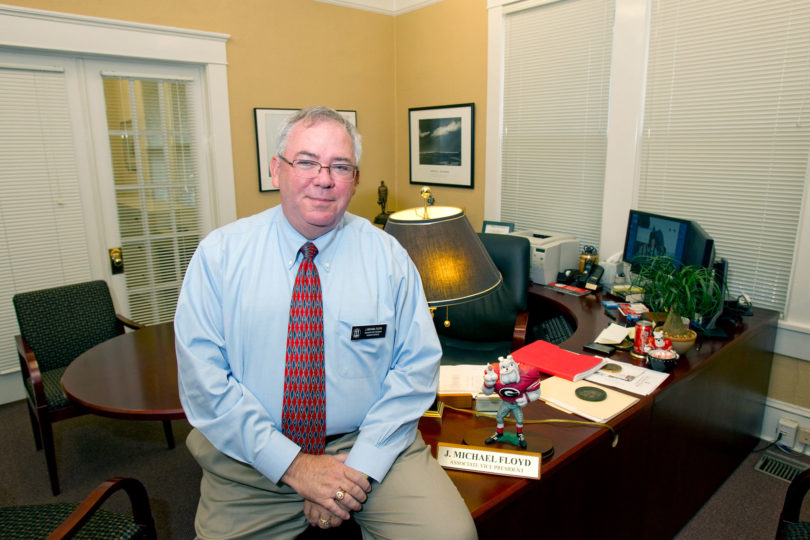 The associate vice president for auxiliary services was all smiles—mixed with a good scoop of business—as faculty, staff and a few students sampled stir-fry, stood in line for hand-mixed milkshakes and tried out vegetarian entrees at the various food stations spread around the new facility in advance of the building’s official Aug. 18 opening.

The 60,000-square-foot building is his crowning achievement, a final stamp on a campus that he has served for 28 years. On Aug. 31, Floyd leaves UGA-and the University System of Georgia-after 40 years in university food services.

“I’m excited that I was here when Bolton opened,” Floyd said. “During my career here at the university, every food operation on campus has been built or renovated. That’s my fingerprint. That’s my touch.”

Floyd’s food service career started in the early 1970s. He was studying to be a history teacher at the then-Valdosta State College when he took a job as a student employee with the food services department. A part-time position became a little more permanent when he was named student manager. It turned into a career choice after he graduated with a bachelor’s degree in education and took a job at Morrison’s Food Services. Two-and-a-half years later, he returned to Valdosta State as food service director.

In 1986, Floyd became head of Food Services at UGA. Over the next 28 years, he moved up the ranks as director and executive director of food services, landing in his current role as an associate vice president in July 2012. The job includes administrative oversight for Parking Services, Campus Transit, the University Golf Course, the University Bookstore, University Printing, Bulldog Bucks and Vending Services-as well as his first love, Food Services.

No matter which job he’s in, Floyd brings with him his commitment to customer service and his fellow staff members.

“All across Auxiliary Services on this campus there are people who care and are committed to customer service,” Floyd said. “Not only have I had the opportunity to observe that from time to time, but I also hear that from customers about how they’ve been treated on campus when they’ve been visiting-how they’ve been greeted at the parking deck by one of our employees or greeted at the dining commons.”

It’s the little things on campus, he said, that make a big difference-like a Parking Services employee helping someone jump-start a car battery, a bus driver looking in the mirror to wait for a sprinting student, a hug from “Miss Sandra” Patterson in the Snelling Dining Commons or a plate of macaroni and cheese that tastes like home.

“The one thing that I always hold close to my heart is a letter I got several years ago,” Floyd said. “I received this letter from a dad, and he had been here on orientation with his daughter.”

They were on campus, eating at ­Snelling, when she turned to her dad and told him, “look, they make mac-and-cheese like Mom did.” His wife had passed away, and his daughter was having issues leaving home and leaving him.

“It was the mac-and-cheese that made that connection,” Floyd said. “It’s all about customer service. It says we made the touch.”

Floyd has made the touch through Taste of Home, which has showcased at least 150 recipes from parents each year; through the 1996 Olympics, 10 days during which Food Services served more than 280,000 meals and catered 225 events in Athens; through Hurricane Katrina and snow storms, the Jason Aldean concert and the midnight to 7 a.m. “Snellabrate.”

Floyd looked across his office at a photograph. The poster-sized image documents a hiker as he reaches the end of the Appalachian Trail. Floyd has done a good bit of hiking and loves the comparison of retirement as reaching the top of a mountain peak.

“I look at life as climbing a mountain,” he said. “You have experiences, hurt a little along the way. I’ve arrived at the top of this mountain. Now the question is, which mountain do I want to climb next?”

For now, he’s looking forward to baby-sitting his two young grandsons, traveling with his wife, Susan, and enjoying their home and their community in Watkinsville.