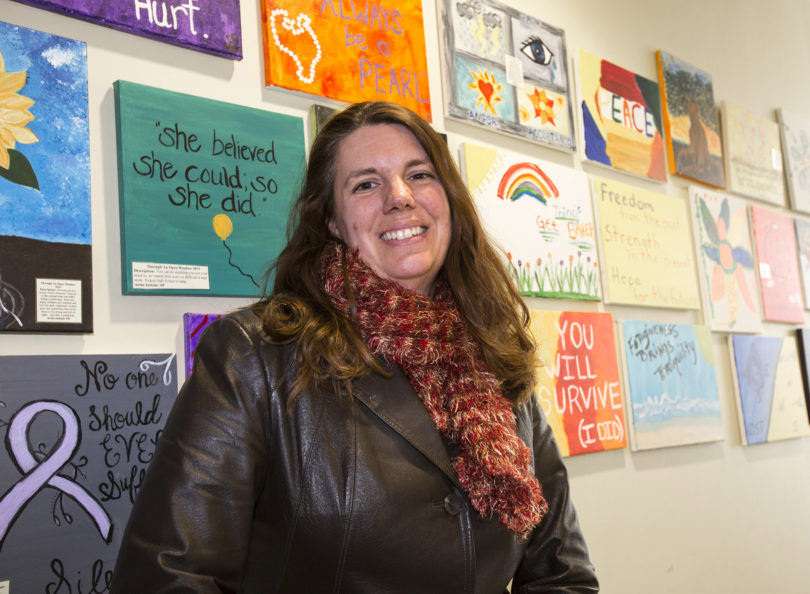 Joan Prittie, director of Athens’ Project Safe and an adjunct faculty member in the UGA School of Social Work, has spent the majority of her career working to end domestic violence and support its survivors.

Prittie, who received the President’s Fulfilling the Dream Award at the Martin Luther King Jr. Freedom Breakfast in January for her work to make King’s dream of equality and justice a reality, has worked tirelessly against domestic violence for decades. But she actually did not discover her passion for the issue until she already had started a career in law.

Prittie graduated from the UGA School of Law in 1993 and went to work for indigent prisoners. She eventually found herself representing battered women in prison who had killed their abusive husbands.

“I saw the injustice, the tremendous pain on top of pain that these people experienced, and I saw where I could help,” she said.

Prittie eventually would leave the legal profession to go to work in nonprofit management. Fifteen years ago, she became the executive director of Project Safe Inc., which works to end domestic violence through crisis intervention, ongoing supportive services, systems change advocacy and prevention and education.

In her role as a part-time educator, Prittie shares this story about finding her life’s work with students and interns. Prittie said many students think they need to find their passion and then go out and work in whatever area about which they are passionate.

“I tell them, you work first and discover your passion through your work,” she said. “I didn’t care about domestic violence until I started on it.”

These kinds of big lessons about careers and the more practical ones about running a charitable organization from a veteran in nonprofits like Prittie can be valuable for students planning a career in public service. This is especially true when it comes to learning how to raise money.

Project Safe’s educational campaigns and support services for domestic violence survivors are what have contributed to improvements in the community. But it is the nonprofit organization’s successful fundraising campaigns that have kept these initiatives going.

“You can’t run an organization very well without resources and, really, without a diversity of resources,” Prittie said.

Prittie shares her knowledge on the subject of funding nonprofits in graduate courses on grant proposal writing and fundraising in UGA’s School of Social Work. She has taught similar courses in the School of Public and International Affairs.

“Everything I teach is based on lessons I had to learn the hard way,” she said. “I learned from doing and from mentors. I think I’m giving students some shortcuts.”

Some of her lessons are simple, like to never turn in a grant application late. But she also stresses that raising money often means getting out of your comfort zone.

“I actually spend most of my time in fundraising classes talking about individual solicitation and developing relationships with people,” she said. “It is very fruitful. In most instances it’s more bang for your time. And it’s also what’s most scary for people.”

For Prittie, teaching at UGA is an opportunity to do two things she enjoys: interacting with students and sharing her enthusiasm for charitable organizations.

“I’m quite evangelistic about nonprofits—charitable organizations in particular—and what they can accomplish in a community if they are run properly,” she said.

When she was younger, Prittie expected that she might one day become a teacher. While she has no plans to get a doctoral degree and become a tenure-track professor, she enjoys working with students as an adjunct faculty member. She also is able to facilitate experiential learning through internships. Prittie has supervised about 200 interns—most of whom attended UGA—in her 15 years at Project Safe.

Through experiences like these, students may have the opportunity to discover their passions and dedicate their lives to working on them.

Prittie has been working on domestic violence long enough to see improvements in how communities react to the issue. Domestic violence continues to be stigmatized and more work is needed to eliminate it, but Prittie said she is optimistic that things will continue to improve.

Like Martin Luther King Jr., Prittie is fueled by optimism for change.

“To me, domestic violence is very much an issue of social justice,” she said. “And it’s a hopeful issue where change is happening and will continue to happen.”