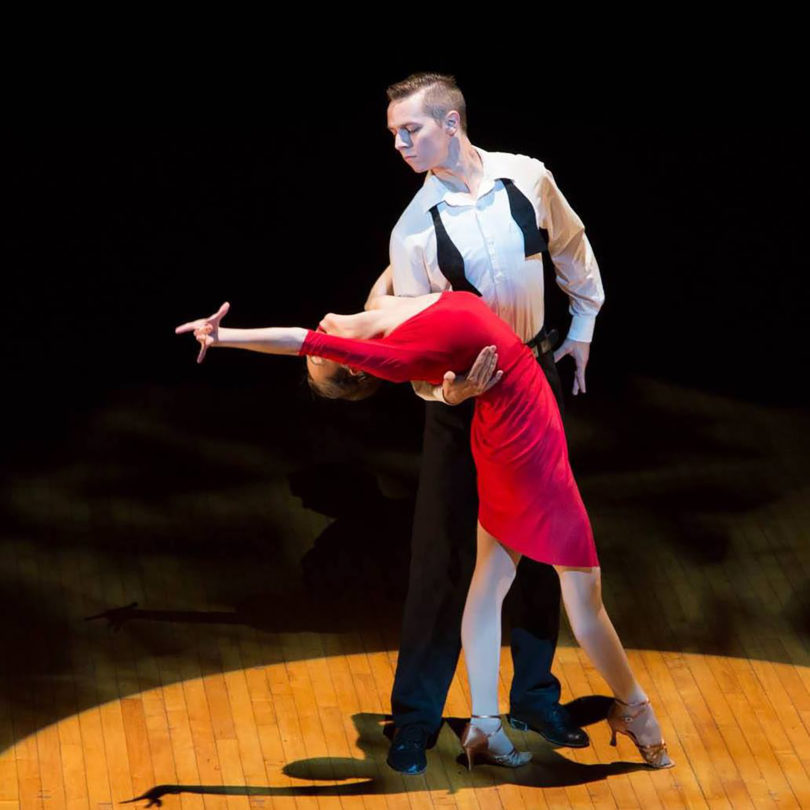 Ballroom Magic 2016, the annual showcase performance by the UGA Ballroom Performance Group, will celebrate its 25th anniversary this month. This year’s performances will take place Jan. 21-23 at the New Dance Theatre at the UGA dance building.

A crew of student dancers, along with some returning alumni, will perform a range of traditional dance styles such as foxtrot, waltz, quickstep, Viennese waltz, cha cha, rumba and swing, but also will feature other styles such as salsa, Argentine tango and theater arts.Co-directors Natalie Grier Cox and Mike Fulford, both UGA and BallroomPerformance Group alumni, helped orchestrate this year’s performance.

“It’s hard to encapsulate the feelings that you’ll have watching this show—so we refer to it as magic,” Cox said. “When you experience it, you want to find ways to become a part of it. You’ll leave amazed at the talent of these students and the production level of this show and will mark your calendar for our 26th show next year.”

The 25th anniversary of this year’s program means a lot to both current and former dancers with the UGA Ballroom Performance Group. This year’s showcase will feature returning alumni and the performance of some of the group’s most famous pieces.

“The successes of our current dancers are largely due to those who have trained and performed before them,” Cox said. “Our extended ‘BPG family’ has created a wonderful support system that enables us to grow to new heights each year. At an anniversary year, it’s an opportunity to celebrate and recognize the entire family.”

Laurel Haislip, a fourth-year communication studies major, has danced in the show for three years. She has the added role of public relations chair for the UGA Ballroom Performance Group.

“Twenty-five years of Ballroom Magic is a testament to the love for this show, not only among the dancers and producers, but also the audience members,” she said. “As a dancer, there is nothing quite as exhilarating as performing night after night in front of a full house who loves the show just as much as we do. It is our gift to the community and it’s their gift to us—and it truly is magical.”

Shows are Jan. 21-23 at 8 p.m., with a 2 p.m. matinee on Jan. 23. Tickets are available at the Tate Student Center, the UGA Performing Arts Center box office and online at pac.uga.edu. They are $16, $10 for students, senior citizens and children.