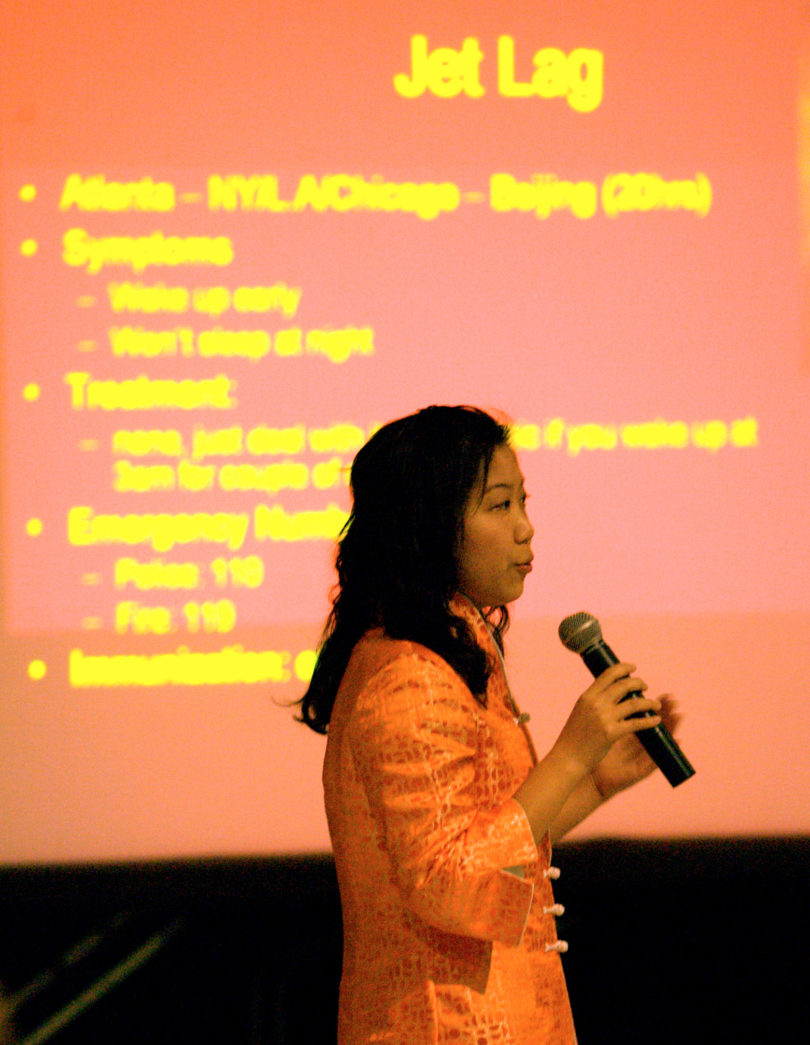 “How many of you think fortune cookies come from China?” Rongrong Liu asked the hundreds of Redcoat band members packed into Leebern Band Hall. “None? Good, so you know not to ask for them.”

In preparation for their two-week trip to China this spring, the Redcoats were offered two sessions of Chinese language and culture lessons last month, led by Liu, China program coordinator of the International Center of Democratic Governance in the Carl Vinson Institute. She also is executive director of the Georgia-China Alliance, an Atlanta-based non-profit organization with a student chapter at UGA. David Romines, ­associate director of university bands and director of the Redcoat Band, attended as did the more than 300 other Redcoats and staff making the trip.

At the first session in early March, the evening was all about dispelling stereotypes while honestly preparing the students for cultural differences.

The air was filled with nervous energy, excited chatter and, in the case of the percussionists, some impromptu drumming on laps. When Liu asked the crowd who had been abroad before, many hands were raised. Only a few hands were raised when she asked who had been to Asia; only two people in the room had ever been to China.

Yes, there are big crowds in China, the students were told-and horrible pollution, unsavory public bathrooms and an overwhelming amount of spitting, which has become so problematic that the government has launched a campaign to curb it in time for the 2008 Olympics in Beijing.

In between factual tidbits about the cities the Redcoats will be visiting-Beijing, Chengdu, Kunming, Xiamen, Changsha, Nanjing and Shanghai-Proctor and Randall regaled the crowd with tales from their own experiences in China, and the more subtle nuances of niceties and politeness.

Proctor and Randall were light-hearted in their delivery, and there was just as much laughing as serious note-taking. Students enjoyed a slideshow with facts on sites they will soon see in person: the Great Wall of China, ancient Daoist and Buddhist temples and the Yangtzee River, known as the “Mississippi of China.”

The students were enthusiastic about picking up both language and customs.

“I think it’s really important that we learn at least a few key phrases of the language,” said Lisa Eckert, a senior from Buffalo, N.Y., who plays the piccolo.