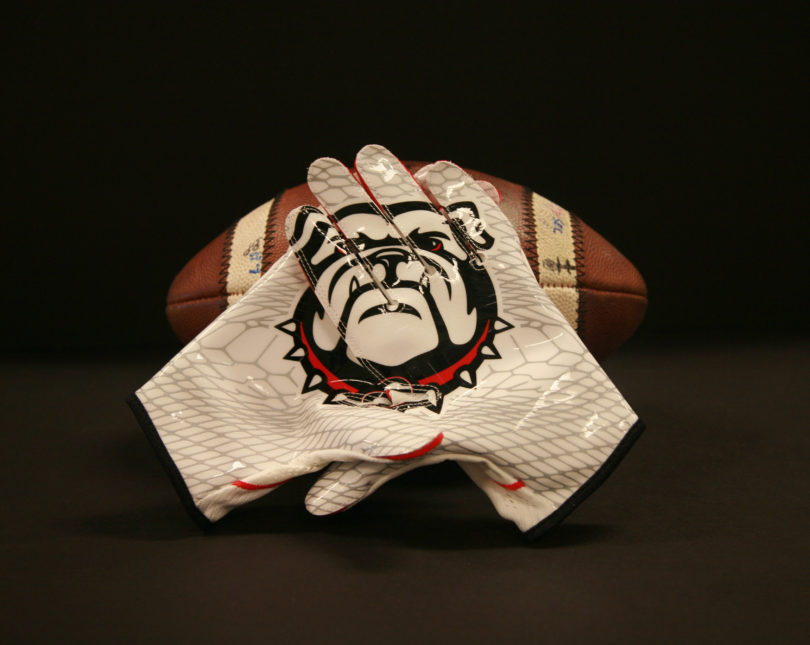 Photographs, uniforms and other artifacts from the UGA Athletic Association Archives and on loan from the UGA athletic department invite visitors to relive the 2017 football season.

As players and fans kick off the University of Georgia’s football season, the Hargrett Rare Book and Manuscript Library plans to revisit recent program history in the new exhibition Beautiful and Brutal: Georgia Bulldogs Football, 2017.

Jason Hasty, Hargrett Library’s UGA athletics history specialist, curates an exhibit each fall exploring the university’s athletics program. For Beautiful and Brutal, he collaborated with John Frierson, a staff writer for the UGA Athletic Association, to create a display celebrating the most storied Georgia football season in recent memory. In 2017, the Bulldogs followed a strong regular season with an SEC title and a win at the Rose Bowl before playing in the College Football Playoff National Championship game in Atlanta. Photographs, uniforms and other artifacts from the UGA Athletic Association Archives and on loan from the UGA athletic department will invite visitors to relive this exciting season.

“For me, this was a team I wanted to see succeed, and I reveled in its achievements because it was comprised of people I liked, people that were easy to root for and admire,” Frierson said.

Hasty echoed these sentiments, saying that the 2017 season “captured the hearts of Georgia fans.” He added his thoughts on displaying more recent collection items: “History isn’t something that happens only in the distant past. Our student-athletes and coaches add their own chapters to the rich history of athletics at UGA each time they step on to the field.”

For fans who long to look further back in football history, Hasty plans to host pop-up exhibits with older items from the collection along with tours of the new exhibition at 3 p.m. on the Friday before each home football game this season. The events will give visitors the chance to see something old and something new from the UGA Athletic Association Archives.

Beautiful and Brutal: Georgia Bulldogs Football, 2017 will be on display in the Rotunda Gallery of the Richard B. Russell Building Special Collections Libraries through Feb. 28. The exhibit is free and open to the public. For more information, call 706-542-6170 or email hasty@uga.edu.