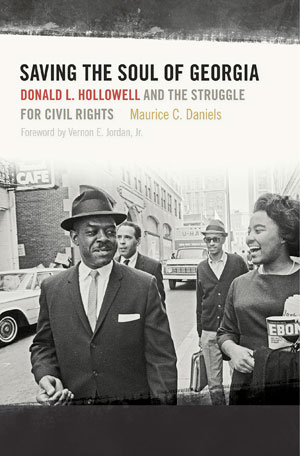 The late Donald L. Hollowell was Georgia’s chief civil rights attorney during the 1950s and 1960s. In this role, he defended African-American men accused or convicted of capital crimes in a racially hostile legal system, represented movement activists arrested for their civil rights work and fought to undermine the laws that maintained state-sanctioned racial discrimination.

In Saving the Soul of Georgia, Maurice C. Daniels, dean and professor of the School of Social Work as well as founder and director of the Foot Soldier Project for Civil Rights Studies, tells the story of this behind-the-scenes, yet highly influential, civil rights lawyer.

World War II was an eye-opener, as Hollowell experienced the discrimination of racist segregationist policies. The irony of defending freedom abroad for the sake of preserving Jim Crow laws at home steeled his resolve to fight for civil rights.

Saving the Soul of Georgia, which will be on sale Dec. 15, also explores the intersections of Hollowell’s work with the civil rights movement.