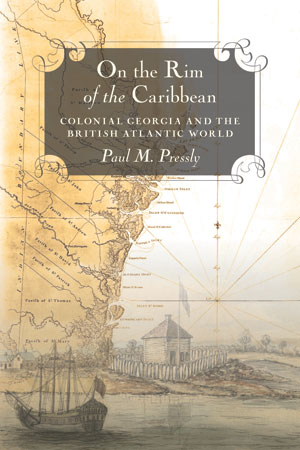 On the Rim of the Caribbean: Colonial Georgia and the British Atlanta World, interprets Georgia’s place in the Atlantic world in light of recent work in transnational and economic history. It will be released by the UGA Press on March 1.

The book was written by Paul M. Pressly, director of the Ossabaw Island Education Alliance, a partnership between the University System of Georgia Board of Regents, the Georgia Department of Natural Resources and the Ossabaw Island Foundation.

Pressly considers how a tiny elite of newly arrived merchants, adapting to local culture but loyal to a larger vision of the British Empire, led the colony into overseas trade. From this perspective, Pressly examines the ways in which Georgia came to share many of the characteristics of the sugar islands, how Savannah developed as a “Caribbean” town, the dynamics of an emerging slave market and the role of merchant-planters as leaders in forging a highly adaptive economic culture open to innovation.