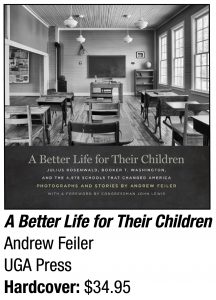 Born to Jewish immigrants, Julius Rosenwald rose to lead Sears, Roebuck & Company and turn it into the world’s largest retailer. Born into slavery, Booker T. Washington became the founding principal of Tuskegee Institute. In 1912, both men launched an ambitious program to partner with Black communities across the segregated South to build public schools for African American children. This is one of the earliest collaborations between Jews and African Americans to drive dramatic improvement in African American educational attainment and foster the generation who became the leaders of the civil rights movement.

Of the original 4,978 Rosenwald schools built between 1917-1937 across 15 southern and border states, only about 500 survive. Many remain unrestored and at risk of collapse. Author Andrew Feiler drove more than 25,000 miles, photographed 105 schools and interviewed dozens of former students, teachers, preservationists and community leaders in all program states.

A Better Life for Their Children includes 85 duotone images that capture interiors and exteriors, schools restored and yet-to-be restored, and portraits of people with unique, compelling connections to these schools. Brief narratives written by Feiler accompany each photograph, telling the stories behind them.