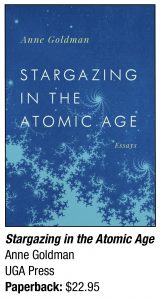 A group of well-known Jewish scientists and artists sidestepped the despair of World War II by challenging themselves to solve some of the most difficult questions posed by that age. Many had just fled Europe. Others were born in the United States to immigrants who had escaped Russia’s pogroms.

In Stargazing in the Atomic Age, Anne Goldman interweaves personal and intellectual history in essays that cast new light on these figures and their virtuosic thinking. Goldman reminds readers that Jewish history offers as many illustrations of accomplishment as of affliction. At the same time, she gestures toward the ways in which experiments in science and art can offer inspiration.