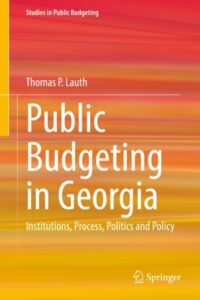 “Public Budgeting in Georgia: Institutions, Process, Politics and Policy” sheds light behind the red tape of fiscal bureaucracy in the state of Georgia. Examining the relationship between the executive and legislative branches of the state, “Public Budgeting” describes the process through which the Georgia General Assembly writes and adopts a budget.

Author Thomas P. Lauth argues that the state’s budget is developed by fiscal conservatives in Georgia, within a culture of fiscal conservatism aiming for low taxes and low spending. Lauth outlines key milestones in Georgia’s fiscal history, comparing Georgia to other states in several different dimensions. “Public Budgeting” aims to educate and interest budgeting scholars, government students and any citizen who just wants to know more about how governments run and decisions are made.

Lauth has written extensively about state budgets, held as an expert in the governmental financials of the state of Georgia. A dean and professor emeritus of the School of Public and International Affairs at the University of Georgia, he has received multiple awards in public budgeting and public administration over the course of his career.

A free PDF download of the book is available through Springer.