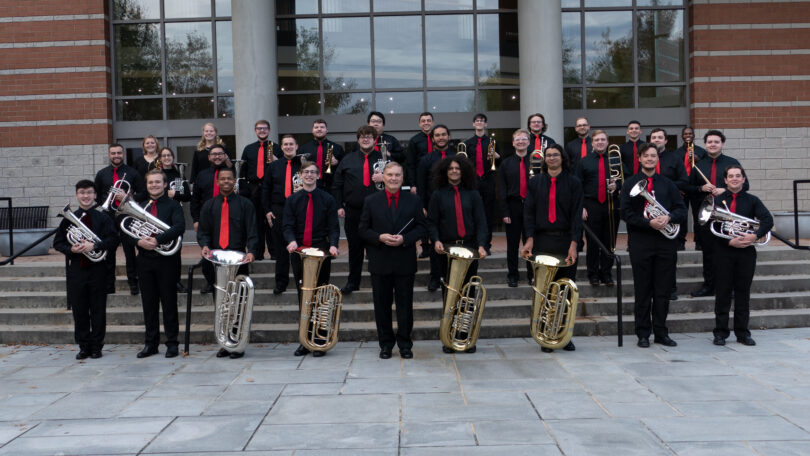 The Hugh Hodgson School of Music Thursday Scholarship Series continues with an exciting concert by the UGA British Brass Band on April 5 at 7:30 p.m. in Hodgson Hall.

The British Brass Band, directed by former New York Philharmonic principal trumpet Philip Smith, has been performing since 2014 when he started at the Hodgson School as the William F. and Pamela P. Prokasy Professor in the Arts. Members are invited into the band each semester through competitive audition.

The program is bookended with two marches. Several student soloists will be featured, including a flugel horn solo on the Scottish traditional piece “Morning Has Broken.” Among the other composers on the program are Lloyd Scott, Peter Graham, Gabriel Faure, Erik Liedzen and even Bobby McFerrin.

The band entered its first North American Brass Band Association competition in March 2017 and scored a third place standing in the First Division and will be competing at the 2022 competition in Huntsville, Alabama, the end of April. UGABBB will compete with Tom Davoren’s “Facets of the Heart,” which is also on the program.

“As I thought about the meaning of this piece, I was reminded about songs that are important to me and that dwell in my heart. I thought many would appreciate and relate to these beautiful melodies,” Smith said. “The band enjoys bringing the joy of banding to others through occasional weekend trips.”

This concert was originally scheduled for St. Patrick’s Day and had to be rescheduled due to COVID-19 rehearsal schedules. Tickets to the March 17 performance will be honored. Tickets are $20 for non-students and $3 for students. They can be purchased through the Performing Arts Center online or by calling 706-542-4400. Proceeds from ticket sales directly support student scholarships.