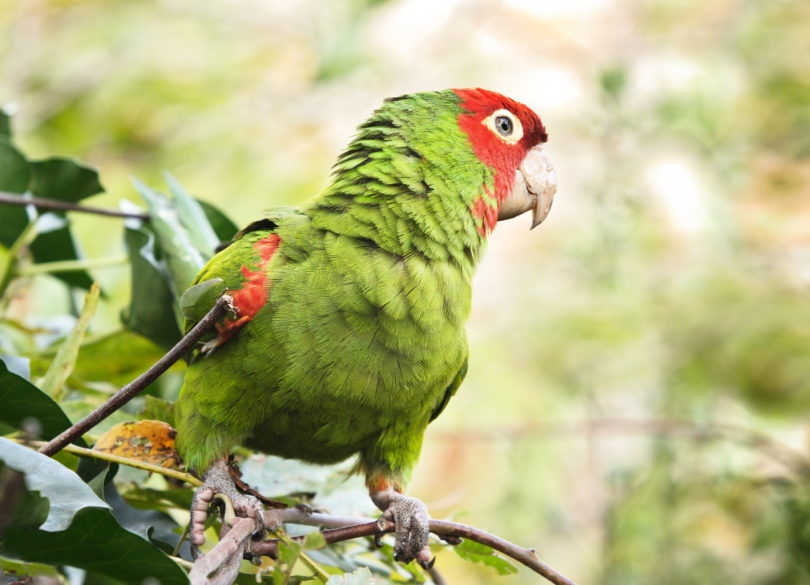 Bromethalin, a common rat poison, is the agent responsible for a neurological disease that has sickened or killed birds from a popular flock of naturalized parrots that reside primarily in the Telegraph Hill area in north San Francisco, according to a new study led by the University of Georgia Infectious Diseases Laboratory and funded by Mickaboo Companion Bird Rescue.

The study, published today in PLOS ONE, caps a multi-year effort to determine the cause of the disease, which has been observed in parrots from this flock since at least 1999.

“The investigation, inspired and funded by Mickaboo, required a team of veterinarians, pathologists and researchers. It is only because the poisoned birds were feral parrots that the condition was so thoroughly investigated,” said first author Fern Van Sant, whose clinic, For the Birds, in San Jose, California, provided care for many of the affected parrots. “The findings offer us an opportunity to assess the true risk of this rodenticide to pets and feral animals and to clarify the risk of potential soil and water contamination.”

The study focused on four parrots that presented in 2018 with a set of characteristic neurologic signs that attending veterinarians say most affected birds exhibit to varying degrees: ataxia, circling, seizures and tumbling. Three of these parrots, like many before them, were euthanized when their condition worsened and they could no longer self-feed.

The study team looked for bromethalin, or its active metabolite desmethyl-bromethalin, based on their findings in 15 historic cases from 2013 through 2017. The historic cases lacked evidence of viruses known to cause neurologic disease in parrots, as well as of exposure to lead or other toxins. But pathologists found consistent lesions in the central nervous system that suggested bromethalin poisoning.

Bromethalin is difficult to detect, especially in living animals, and particularly in free-ranging birds. Some assays have successfully detected bromethalin in fat tissue of animals, but birds typically do not have surplus fat from which samples can be drawn and tested. In their study, the UGA-led team screened fecal samples from live birds, as well as liver and brain samples from deceased parrots. Co-author Sayed M. Hassan, director of the UGA Laboratory for Environmental Analysis in the Center for Applied Isotope Studies, detected both bromethalin and desmethyl-bromethalin in brain, liver and fecal samples utilizing high-performance liquid chromatography.

The study’s findings suggest that parrots do not metabolize the potent neurotoxin in the same manner that has been described in other species, and/or that the parrots are ingesting a sublethal dose. The authors do not know how the parrots are being exposed to bromethalin, but they are planning a follow-up study to determine the source.

“We now need funding from individuals and groups interested in protecting our environment to help us understand if this toxin is accumulating in a space where it could pose a health risk in other free-ranging animals, or, possibly, in companion animals and people,” said co-author Branson W. Ritchie, a veterinary research professor and co-director of the Infectious Diseases Laboratory.

The birds primarily reside in neighborhoods near the San Francisco-Oakland Bay Bridge and frequent the area’s parks, but affected birds have been found throughout San Francisco, including on busy streets and downtown sidewalks. The total number of birds affected to date is difficult to estimate, but from 2003 through 2018, Mickaboo Companion Bird Rescue had established records on 158 San Francisco parrots, of which 55 died, 53 were adopted, 22 were released including three that escaped, and 25 remain in foster care. Of the birds in foster care or adopted, many have persistent neurologic deficits, including paresis and ataxia, that require special care.

Members of the public who come in contact with a possibly affected parrot should immediately report the bird and its location to San Francisco Animal Care and Control, 415-554-9400; the poisoned birds need professional help and should not be handled or harmed. If necessary, a towel can be used to move the bird to a secure box or dog kennel.

“Mickaboo Companion Bird Rescue is grateful to Dr. Van Sant, the University of Georgia, and all of the skilled professionals who have worked so hard and so long to find out what was killing these beautiful birds,” said Michelle Yesney, current CEO of Mickaboo. The parrots and their plight gained notoriety after being featured in a book and a documentary both titled “The Wild Parrots of Telegraph Hill.”

Coauthors on the study included Drury Reavill, of the Zoo/Exotic Pathology Service, Carmichael, California; Elizabeth W. Howerth and Mauricio Seguel, of the Department of Pathology in the College of Veterinary Medicine; Rita McManamon, Christopher R. Gregory, and Paula G. Ciembor, of the Infectious Diseases Laboratory in the College of Veterinary Medicine; Kathy M. Loftis, of the Center for Applied Isotope Studies; and Richard Bauer, a graduate student in the Laboratory for Environmental Analysis. “Evidence of bromethalin toxicosis in San Francisco ‘Telegraph Hill’ conures,” is available online at https://journals.plos.org/plosone/article?id=10.1371/journal.pone.0213248