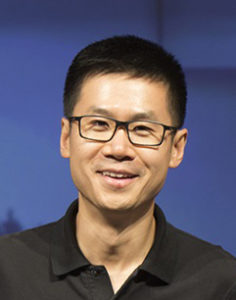 Xiangyu Deng, an assistant professor at the Center for Food Safety, has been awarded the Larry Beuchat Young Researcher Award by the International Association for Food Protection. The award recognizes excellence in food safety and was presented to Deng at the recent IAFP meeting.

The IAFP presents the Beuchat Award to a young researcher who is an active member and has shown outstanding ability and professional promise as a researcher in food microbiology and/or food safety in the early years of his or her career. Sponsored by bioMerieux Inc., the award includes a plaque and a $2,000 honorarium.

The IAFP named the award in honor of UGA Distinguished Research Professor Larry Beuchat, a retired College of Agricultural and Environmental Sciences food microbiologist at the Center for Food Safety on the UGA campus in Griffin. Deng is also a researcher at the center, where Beuchat still actively participates in research projects.

Deng was recognized for creating a cloud-based software tool that quickly classifies strains of salmonella, one of the most prevalent foodborne pathogens in the U.S. and worldwide. The SeqSero system identifies serotypes, or distinct strains of salmonella, from infected humans, animals, foods and the environment using whole genome sequencing. This system allows for accurate, fast fingerprinting of any salmonella strain and replaces a complicated, time-consuming laboratory protocol.