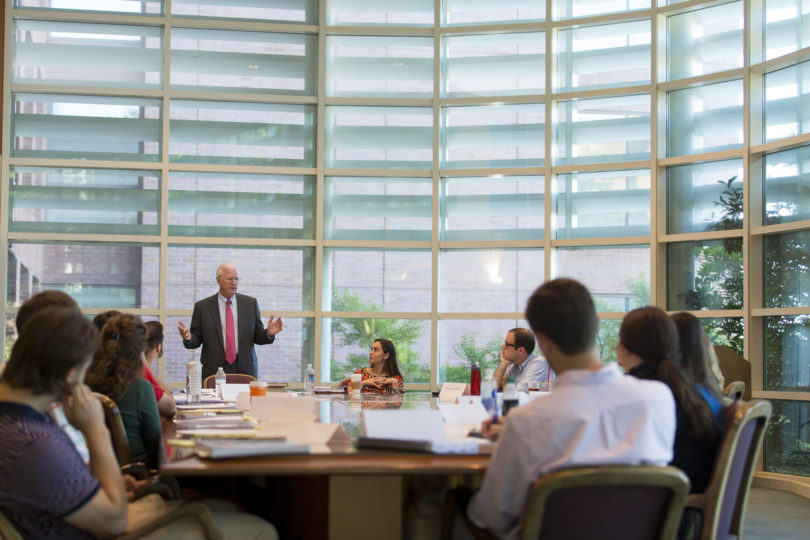 Former U.S. Sen. Saxby Chambliss is teaching Political Leadership and the Law at the UGA School of Law this fall. Photo by Andrew Davis Tucker/UGA.

Athens, Ga. – Students taking the course Political Leadership and the Law at the University of Georgia School of Law this semester are receiving firsthand insights into public service from former U.S. Sen. Saxby Chambliss. He is co-teaching the class for the fall 2015 semester with his former chief of staff, Camila Knowles, who is now serving as commissioner of the Georgia Department of Community Affairs. The first class was held today, Aug. 24.

Georgia Law Dean Peter B. “Bo” Rutledge said having Chambliss and Knowles teach a class addressing the intersection of the law and political leadership is a tremendous honor for Georgia Law. “In this class, our students will not only interact and learn directly from two accomplished public servants but they will have the opportunity to meet and have meaningful dialogue with other political leaders-such as Georgia Gov. Nathan Deal-who will be invited classroom guests,” he said. “There is no question that this class will be one of the highlights of a student’s academic career at Georgia Law-especially for those who are interested in pursuing a career in public service.”

Ashley M. Walker, a Georgia Law second-year student, said she is excited to be enrolled in the Political Leadership and the Law course. “Former Sen. Chambliss has been an influential figure in state and national politics, and I cannot wait to learn from his experiences,” she said.

Chambliss said he is honored to be returning to UGA as the law school’s Sanders Political Leadership Scholar. “I am looking forward to sharing my experience of 20 years in public service with tomorrow’s leaders,” he said. “The University of Georgia School of Law is one of the top law schools in America, and to have the opportunity to be a part of the faculty is very humbling.”

Knowles said she is excited and honored to join Chambliss in the classroom. “I look forward to a rewarding and robust dialogue with the bright law students who have an interest in public service law,” she said. “I hope this class may spark a desire for these future leading lawyers to seek a career in service of our state and our nation.”

Rutledge said having proven leaders, who have distinguished themselves in the public sector, teach law students with real examples of how the law and government truly work together is what the late Gov. Carl E. Sanders envisioned with the Sanders Political Leadership Scholar position. “Gov. Sanders truly cared about today’s law students getting an excellent, affordable legal education right here in the state of Georgia as well as having the opportunity to learn the true meaning of service,” he said.