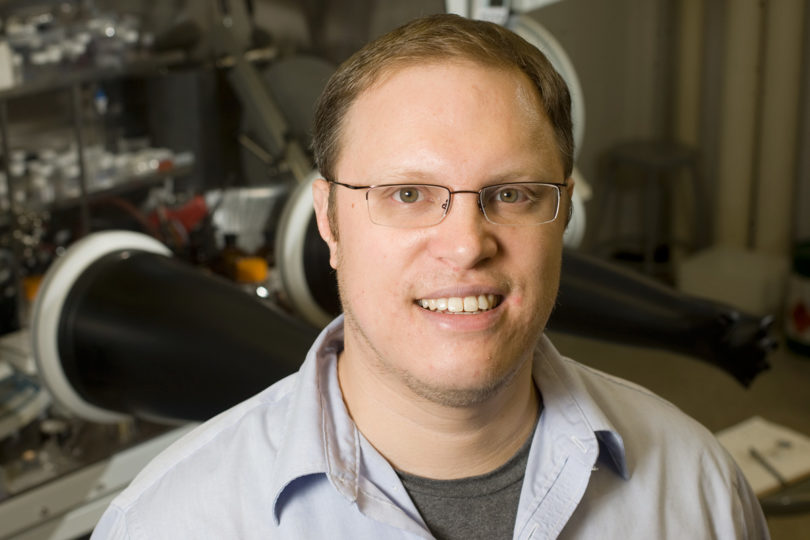 Todd Harrop, an assistant professor of chemistry in the Franklin College of Arts and Sciences, is the recipient of a National Science Foundation CAREER Award, one of the most prestigious awards for young researchers.

Harrop will receive $626,775 over the next five years to examine how certain types of metalloenzymes respond to reactive molecules derived from molecular oxygen. The research has the potential to help treat or prevent the buildup of toxic molecules that are formed during heart attacks and strokes.

The award is highly competitive. In 2009, only one in four CAREER proposals submitted to NSF were funded. Harrop’s award brings the number of researchers at UGA who have received a CAREER Award to 22. He joins chemistry department CAREER Award recipients Timothy Dore, Geoffrey Smith and Jason Locklin. Vladimir Popik, a member of the chemistry faculty, also received a CAREER Award while an assistant professor at Bowling Green. Locklin, who holds a joint appointment with the Faculty of Engineering and the Franklin College, received the honor only a few weeks earlier.

“Todd and Jason are the third and fourth assistant professors in chemistry to receive this award,” said Jon Amster, head of the chemistry department. “Getting two of these awards in one year validates our belief that we have recruited truly outstanding young faculty to our department. The funding climate is very tight right now, and these awards will give Todd and Jason the ability to rapidly grow their research programs and give them national recognition at an early stage of their careers.”

This also was Harrop’s first application for the award, according to Amster.

“A program officer at NSF told me that this is a very rare occurrence,” he said. “Most applicants for the CAREER Award do not receive it until the second or third try, if at all, so extra kudos can be given to Todd and his research.”

“The most exciting aspect of this research is that we will be making molecules that will help us really probe the way nature destroys certain toxic molecules,” said Harrop. “These synthetically created molecules could potentially be used someday to combat the buildup of reactive oxygen species that occur during stroke or heart attack. They also might be used as molecular sensors to detect the presence of these dangerous toxins in the body—somewhat like molecular imaging of cancer tissue.”

Part of Harrop’s award will be used to host a summer research student from Fort Valley State University. The summer fellow will help plan and execute a specific portion of the project and present this work at a national meeting of chemists, said Harrop.