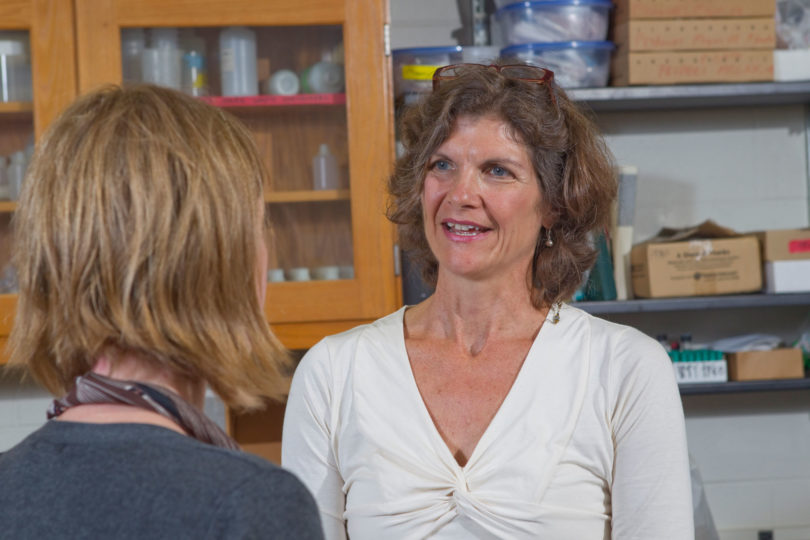 Associate professor of ecology Amy Rosemond (right) was exposed to a rich diversity of nature as a child growing up in central Florida. It was there that she also witnessed the consequences of rapid land development to the natural world she loved.

“We love algae—it was gross!” proclaims a hand-drawn thank-you note posted on Amy Rosemond’s office door. The note is from a group of the more than 1,000 Barrow Elementary School students who have participated in Rosemond’s “Slime TV” project since 2000. “Slime TV,” which features pond algae viewed through a microscope and projected on a TV screen, is a consistently popular part of the school’s annual Science Olympiad.

Rosemond, an associate professor in the Odum School of Ecology who specializes in the ecology of freshwater ecosystems, can relate to the young students’ enthusiasm.

Her fascination with streams and lakes—and the creatures that live in them—started early. Growing up in central Florida, Rosemond was exposed to a rich diversity of nature in her own backyard.

“I grew up catching minnows with my sister in the lake behind our house and duck hunting with my brothers,” she said. “I used to find freshwater jellyfish in the lake and keep them in the bathroom sink—my parents didn’t know about that at the time.”

She also witnessed the rapid development of the area and its consequences for the natural world she loved.

“I saw how the water in our backyard lake was drawn down when a golf course went in next door,” she said. “I learned early on that what we did on the land had an effect on the water.”

Rosemond came to UGA as a postdoctoral associate on a fellowship funded by the National Science Foundation to work with two eminent aquatic ecologists: Distinguished Research Professors Catherine Pringle and Judy Meyer.

Rosemond became assistant director of the Institute of Ecology, as it was then known, in 1997. She received an appointment as an assistant professor in 2005 and was promoted to associate professor in 2011.

Rosemond’s teaching, research and public service activities at UGA draw upon her early experiences of nature. Much of her work deals with stream food webs and how global change affects freshwater ecosystems.

“At the moment I’m working on a large-scale experiment at the Coweeta Hydrological Laboratory on the effects of nutrients on streams,” she said. “With funding from NSF, we’re looking at the effects of nutrient enrichment, which is the most ubiquitous threat to stream ecosystems worldwide. We’re adding nitrogen and phosphorus to streams at different ratios that mimic what you’d get with different kinds of land use changes, and we’ll be looking at the responses of everything from fungi and bacteria, macroinvertebrates and salamanders to ecosystem-scale fluxes of carbon.”

“I love teaching,” Rosemond said. “Limnology is so much fun. Loren Eisely said ‘If there is magic on this planet, it is contained in water.’ I get to teach about water’s physical, chemical and biological richness—things that people don’t typically think about, but that students need to know so we can better manage those resources.”

As her work with the Barrow Elementary students attests, Rosemond’s enthusiasm for teaching about water extends beyond UGA’s walls.

“Doing ‘Slime TV’ is definitely my favorite outreach activity,” she said. “With the recent coverage of the space shuttle program shutting down, a lot of kids are disappointed that they won’t be able to go out and see new worlds beyond ours. But with a microscope, they can enter and explore a new world within our own. I love that.”