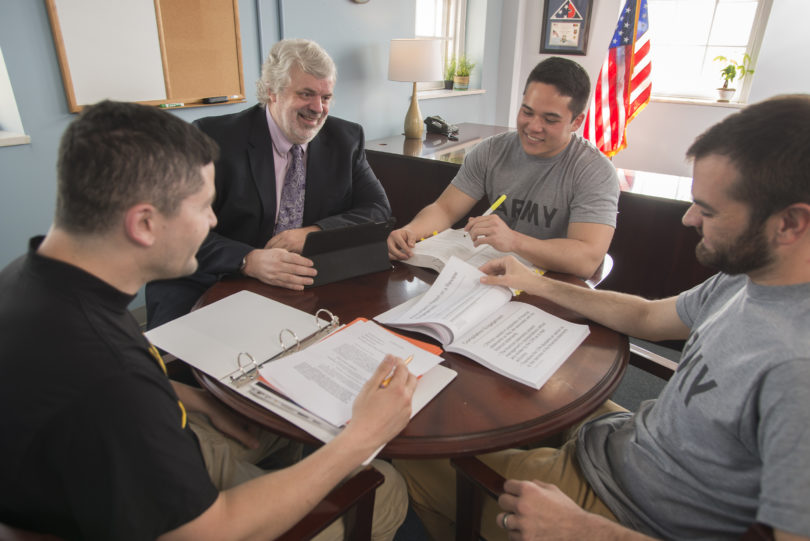 Richard Stafford served his country in Vietnam. Now, he is hoping his country will be there for him in his time of need.

Stafford was stationed on the U.S.S. America supercarrier in the Gulf of Tonkin, and flew missions over Vietnam as a radar operator.

Decades later, Stafford, who now lives in Macon, was diagnosed with Type 2 Diabetes, a disease associated with exposure to Agent Orange (a tactical herbicide used by U.S. forces in the war). The disease has limited his mobility in both legs. He says he can barely walk 100 yards without having to stop to rest and ease the severe pain in his feet.

Initially, the Department of Veterans Affairs awarded Stafford partial disability payments. But as the condition worsened, the Navy veteran thought he should be eligible for full disability pay. But after a long and frustrating process, Stafford’s claim was denied by the VA. He wanted to appeal, but would have to navigate a complex bureaucracy. The veteran would need to gather stacks of medical documents and devote considerable time and effort to understanding how to launch a successful appeal.

“It gets very involved for a layman to put a case together,” Stafford said.

Fortunately, the University of Georgia School of Law was launching an initiative that could help with Stafford’s case.

The Veterans Legal Clinic serves Georgia veterans and their dependents to help them get the benefits they have earned through military service. The clinic, which opened in May, focuses on helping clients with benefits claims already submitted to the VA and the Social Security Administration, said Alexander Scherr, a UGA law professor and director of the clinic.  The VA claims process can be notoriously long and complex, and the clinic helps move cases along.

The clinic was made possible thanks to a lead gift from law school alumnus James E. “Jim” Butler Jr. The clinic accepts work from all over Georgia. However, its primary focus will be a 15-county region surrounding Athens, serving rural, isolated areas, where veterans lack access to a wide range of services—advocacy and legal services in particular.

Stafford is one of the clinic’s first clients and is helping UGA law students gain experience while they are assisting with his case. The clinic is a law practice that has second- and third-year law students taking on cases with Scherr as their supervisor.

“It’s a great chance for students to learn in a safe environment where there’s a bit of a safety net,” Scherr said, “and they’re able to really work on cases that matter.”

Tyler Mathis, a second-year law school student, turned down a paying internship to work for free at the clinic over the summer.

“What really drew me to the clinic was the thought of being able to help people,” Mathis said. “But one of the most valuable experiences has been face time with veterans. “Interacting with clients isn’t something they can teach us out of a book.”

Neither is the sense of public service they get by working on these cases.

Stafford said the students have been diligent in putting his case together. Soon they will be filing his appeal. And while he doesn’t want to get too confident about which way the VA will decide his case, he said the clinic has certainly raised the odds that he’ll win the appeal.

“I’m sure there are a lot of other veterans out there in similar situations as me,” he said. “And if they can receive help from the Veterans Legal Clinic, they’d be well advised to do so. I think it’s a great experience for the students, and it’s a great help for the veterans.”

The clinic does not specialize in other civil or criminal issues. However, they will provide referrals for veterans facing these concerns.

Individuals seeking help from the clinic can call 706-542-6439 or send an email to veteranslegalclinic@uga.edu