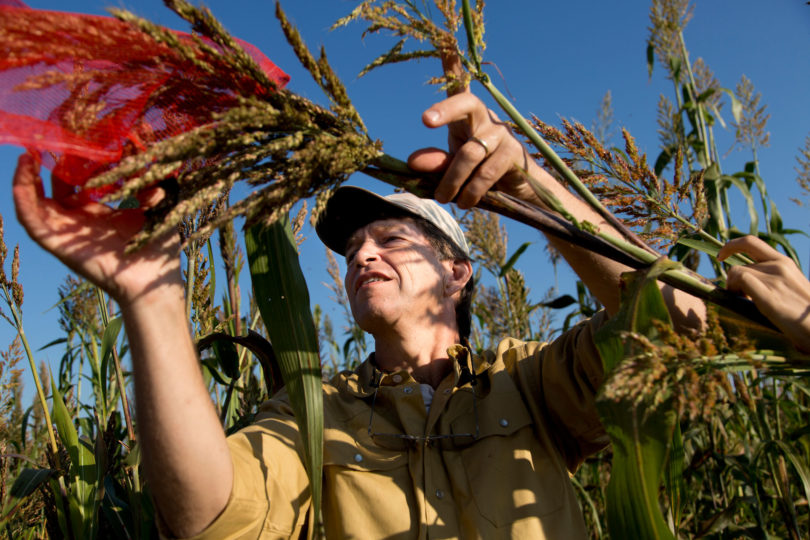 When UGA plant geneticist ­Andrew Paterson started to look for lines of sorghum that might survive in some of the most parched places in the world, he didn’t plant trials in the desert.

He started out by researching which plants could survive a winter in Georgia.

“We don’t see a lot of correlation between surviving cold and surviving drought,” Paterson said.

But when sorghum that could withstand a Georgia winter was planted half a world away, the results were stunning: 48 percent survived eight months without rain in the north African nation of Mali.

Paterson, a Regents Professor in UGA’s College of Agricultural and Environmental Sciences, heads up the Feed the Future Innovation Laboratory for Climate-Resilient Sorghum. The $4.98 million U.S. Agency for International Development Feed the Future project is aimed at creating varieties of sorghum that can survive extreme drought and appeal to those who eat the cereal as part of their traditional diet.

Sorghum, a crop sometimes called the “camel of cereals” because of its ability to withstand drought, requires about one-third less water than wheat and half of the water maize needs. It is a native plant and traditional staple crop in some African countries where climate change is exacerbating food insecurity, so providing farmers with an even more drought-resilient sorghum could give them a crop to count on, even in the driest years.

In the U.S., sorghum is used mostly for animal feed and fuel. It’s also a component in syrup and gluten-free versions of otherwise starchy products (like beer), but it’s not a major food crop.

In its third year, the climate-resilient sorghum project has made progress in its mission to use genomics tools to create even hardier varieties of sorghum, all the while promoting sustainable farming by preserving and restoring soil and water resources.

The work started in Georgia when Paterson began to look for sorghum lines that could grow perennially.

The ability to survive both cold and drought is connected to the plant’s ability to make rhizomes, underground shoots that may seem like roots but are actually stems that can store energy for the plant and grow into an above-ground stem.

Its ability to grow rhizomes led Paterson to another plant that might lend some of its resiliency to sorghum: Johnsongrass.

“We made a backcross to sorghum, so the progeny are 75 percent sorghum, 25 percent Johnsongrass,” he said.

By the end of the project in 2018, plant breeders in Mali, Ethiopia and elsewhere in Africa will have adapted lines of sorghum that are based on their local varieties but with new mechanisms of drought resiliency bred into them.

“That will be the biggest single deliverable of the project,” Paterson said.