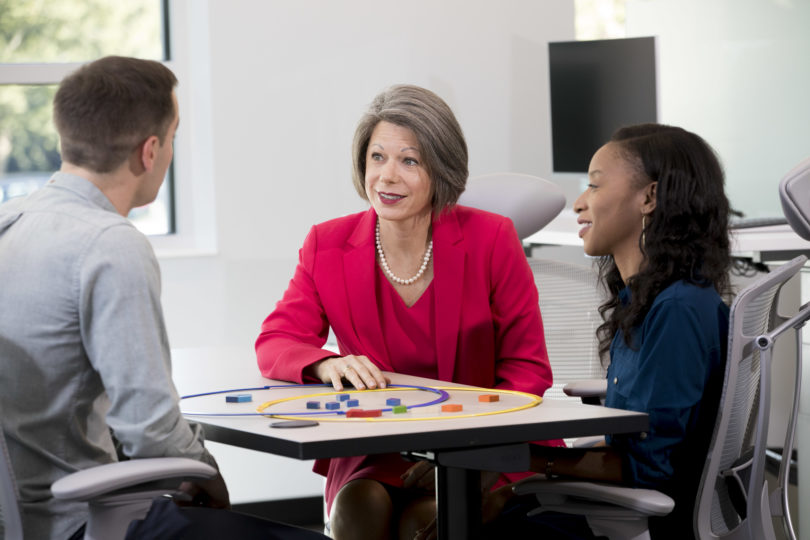 Denise Spangler, the new dean of the College of Education, joined UGA’s faculty in 1995 and has held various leadership roles. (Photo by Dorothy Kozlowski)

Denise Spangler has wanted to be a teacher for as long as she can remember.

And while her work environment no longer looks like a traditional classroom setting, her passion for making a difference is consistently rooted in education and in the development of young minds.

Spangler, the new dean of the University of Georgia’s College of Education, is a first-generation college student who discovered her dual passions for elementary and mathematics education as an undergraduate student at Illinois State University.

“The only doctors I knew growing up were medical doctors and dentists,” said Spangler, the Bebe Aderhold Professor in Early Childhood Education. “I didn’t even know there was such a thing as a Ph.D. until I was in graduate school getting my master’s degree. All of a sudden, it hit me that being a professor is a job people can actually have.”

Before Spangler returned to graduate school to study how pre-service teachers learn to teach mathematics, she taught elementary school and—encouraged by her students’ enthusiasm and willingness to learn—consistently tailored her lessons to ensure they received the most engaging learning experience.

When Spangler began writing her dissertation at UGA, she found numerous studies focused on the shortcomings of mathematics teachers—from what teachers didn’t understand about fractions to their struggles with proportional reasoning.

Instead of scrutinizing educators, Spangler—armed with her own experiences teaching young students—began conducting long-term studies on how beliefs and other contextual factors influence teaching practices over time.

“If you believe that math is just about memorizing basic facts and being fast at calculations, then that’s going to affect how you teach math,” she said. “You’re going to do things like give timed multiplication tests because that’s what you believe math is about. So, everything in the literature indicates that what a teacher believes in is important, and it takes a long time to change beliefs.”

After following several pre-service teachers whose preferences for mathematics ranged greatly and studying their teaching practices for more than a decade, Spangler saw dramatic shifts in their beliefs and the impact this change had on their instruction over time.

“There are some teachers who have this amazing transformation in teacher education, and they can hold on to it for a decade or more and make it work in their classroom despite the pressures of standardized testing,” she said. “Then there are other teachers who believe it, or at least they say they believe it, but they can’t enact it because they feel pressured by the school administration or parents’ expectations.”

Whether she’s working with pre-service teachers or one of her six doctoral students, Spangler strives to inspire genuine curiosity in the way they approach their teaching. By introducing a sense of excitement and flexibility in their work, she believes future teachers can better meet the needs of each individual student and make innovative connections across the curriculum.

As the oldest child of a single-parent home, Spangler learned to problem solve and adapt to unexpected obstacles early in life. With the skills and experience to lead, she’s passionate about supporting faculty, staff, students and alumni of the education college as they work to make the community a better place for people with a range of disabilities and health conditions, including Parkinson’s disease, autism spectrum disorder and dyslexia.

After joining UGA’s faculty in 1995, Spangler began gravitating toward various leadership roles in the education college, from head of the department of mathematics and science education to associate dean for faculty and staff services to senior associate dean.

During her academic journey, she helped influence local educational policies as a member of the Clarke County School District Board of Education for 12 years and is also passionate about supporting early career faculty as a mentor for UGA’s Teaching Academy Fellows program.

“My big theme for this year is building community,” said Spangler. “I want to see more of us be present in meaningful ways because it’s pretty clear to me that the grand challenges of our time are going to be solved with interdisciplinary groups of people coming to the table with their best ideas.”