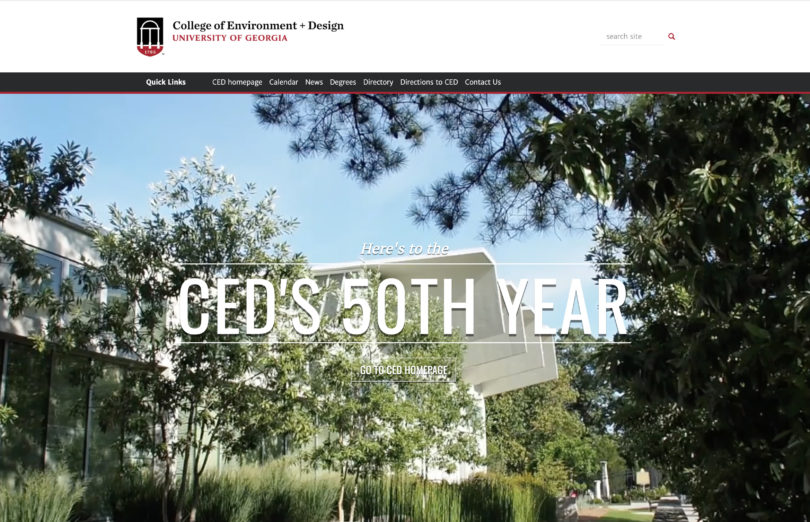 In the summer of 1969, the University of Georgia founded the School of Environmental Design (later, the College of Environment and Design or CED)—a manifestation of the reformist environmental spirit of the 1960s.

By that time, UGA was already a pioneer in environmental design and landscape architecture; the first landscape design class was taught at the university in 1928. Since then, the faculty, students and alumni have dedicated themselves to bringing creativity, environmental stewardship and social responsibility to the planning, design and preservation of landscapes and communities.

This month, the college begins a 50th anniversary celebration that will feature an exhibition, a book, a website, a symposium, a series of high-profile lectures and additional public events.

“The 1960s were a time of hopeful achievement,” said CED Dean Sonia A. Hirt. “The era brought a series of groundbreaking laws and practices that have shaped America and the world ever since. Among them were the National Historic Preservation Act, the National Environmental Policy Act, the Clean Air Act and the Clean Water Act.”

CED will host its 50th anniversary exhibit opening Aug. 22 from 4:30-6 p.m. at the college’s Circle Gallery in the Jackson Street Building. The exhibit explores the historical context and the evolution of the college, according to Melissa Tufts, director of CED’s Owens Library and Circle Gallery.

“It is not a conventional history, but rather a glimpse into the past decade by decade from 1969 to 2019, identifying trends, events and people who might have shaped our story,” Tufts said. “Each of our programs—landscape architecture, historic preservation and environmental planning and design—is represented through work, research and the people of the college.”

The exhibit, which is on display until Feb. 7, 2020, has three components: a timeline, a wall of curiosities in the tradition of “wonder rooms” that harken back to 16th-century Italy, and a rotating exhibit on three movable walls that will change throughout the coming year.

“We look forward to welcoming the entire UGA community to join us in celebrating this important milestone in our history,” Hirt said.