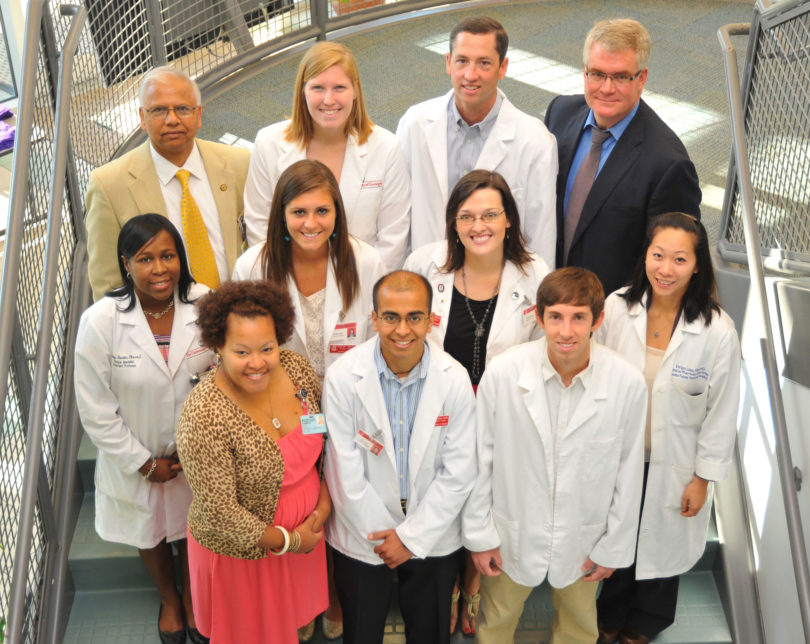 The inaugural Albany campus class and staff are

The College of Pharmacy welcomed 144 new students into the Class of 2016 with its annual white coat ceremony on Aug. 11. During the program, all new students received white lab coats to mark the beginning of their pharmacy studies.

Of the 144 members in the class, 68.8 percent are female, 35.7 percent are minorities and 28.5 percent have earned a bachelor’s degree or higher. Their GPA is 3.48, with an average Pharmacy College Admission Test score in the 79th percentile.

In addition to the new students starting their studies in Athens, an inaugural class of pharmacy students began third-year classes at the pharmacy college’s Southwest Georgia Clinical Campus in Albany.

The six students will complete their third and fourth years of study at the clinical campus. They are participants in the college’s 2+2 program, which lets pharmacy students spend the first two years of undergraduate training in Athens followed by two years at an alternate site.

The pharmacy college officially opened the new campus in 2011 with the classroom and student laboratory space needed to support the Doctor of Pharmacy program and the Graduate Certificate Residency Program in south Georgia.

“Southwest Georgia, for a long time, has not had an adequate number of pharmacists,” said Dean Svein Øie about the need for the new program. “We aim to train them there in hopes they will stay in that area.”

The space includes faculty offices, a classroom equipped for video conferencing with other campuses in the state, including Athens and Augusta, as well as a student lounge and computer area. The space is designed to promote and foster interactions between alumni, students, residents and faculty members in south Georgia.

Current plans call for the program to eventually accommodate 50 students and five faculty members at the Albany campus.