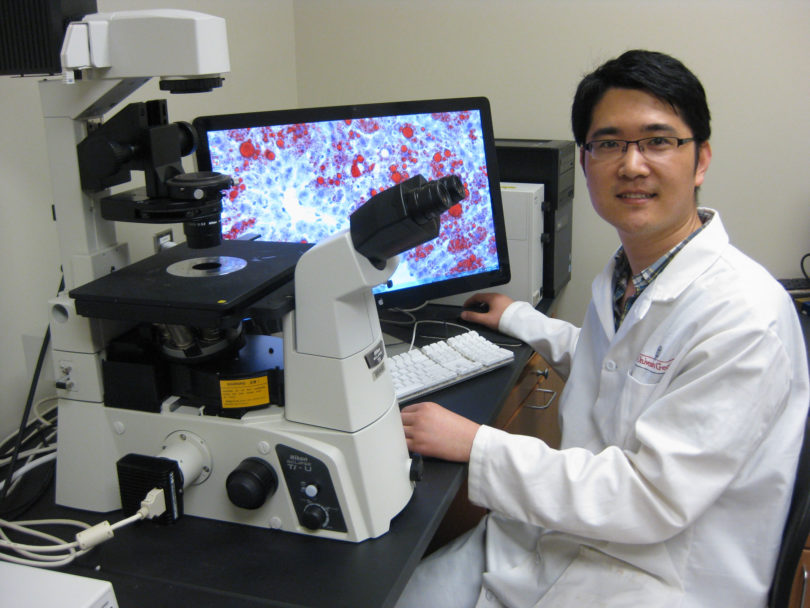 Mingming Gao is a postdoctoral fellow in UGA's College of Pharmacy department of pharmaceutical and biomedical sciences. He is also a member of UGA's Obesity Initiative.

If current trends continue, roughly 42 percent of the people in the U.S. will be obese by 2030, according to the Trust for America’s Health. As obesity rates climb to unprecedented levels, an equally dramatic increase in new cases of obesity-related diseases like Type 2 diabetes, coronary heart disease, stroke, hypertension and arthritis is expected.

Now, researchers at UGA are testing new treatments they hope will one day stem the tide of obesity and the potentially life-threatening illnesses that accompany it.

In two recent studies published separately in Molecular Therapy and Pharmaceutical Research, scientists from the College of Pharmacy’s pharmaceutical and biomedical sciences department demonstrate the key to stopping obesity may lie in controlling inflammation.

“Obesity causes chronic inflammation throughout the body, and this inflammation is a major cause of obesity-related problems like fatty liver and insulin resistance,” said Mingming Gao, a postdoctoral fellow and lead author of both studies. “The compounds we are testing in mice have strong anti-inflammatory properties, which, in our experiments, protected the mice from weight gain and other serious complications.”

In the Pharmaceutical Research paper, Gao and his collaborators fed two groups of mice a high-fat diet, but one group was injected twice weekly with rutin, a plant pigment commonly found in fruits and vegetables. After several weeks, body fat levels in the untreated mice grew more than four-fold while the mice treated with rutin remained normal.

The mice treated with rutin also were protected from fatty liver disease, a condition in which large pockets of triglyceride fat accumulate in liver cells, sometimes leading to cirrhosis, cancer or liver failure.

“Rutin is a common ingredient in many alternative treatments, particularly those used in traditional Chinese medicine, so we thought it was worth investigating,” said Gao, who is also a member of UGA’s Obesity Initiative. “What we found is that rutin effectively blocked many of the cellular processes that cause inflammation, weight gain and disease.”

The group saw similar results with another treatment described in Molecular Therapy. Mice were again fed a high-fat diet, but one group was treated with an injection of interleukin 10 or IL10, a molecule naturally produced by the body to control inflammation and regulate parts of the immune system.

While untreated mice on a high-fat diet gained weight quickly and began to show the early symptoms of diabetes, those treated with IL10 maintained healthy fat levels and showed no signs of insulin resistance. The researchers suggest this is because IL10 reduced the activity of macrophages-an important component of the immune system that, when over-activated by excessive weight gain, can cause significant inflammation.

Gao is quick to point out that these are preliminary results and much work must be done before these approaches might find use in a clinical setting, but he is confident this research can produce useful treatments for obesity.

“Eating a balanced diet and getting sufficient exercise is clearly one of the most important steps in combating obesity,” he said. “But we know this is a battle we must fight on multiple fronts, so we are looking to a future where those suffering from serious metabolic disorders can find some help in a clinical setting.”