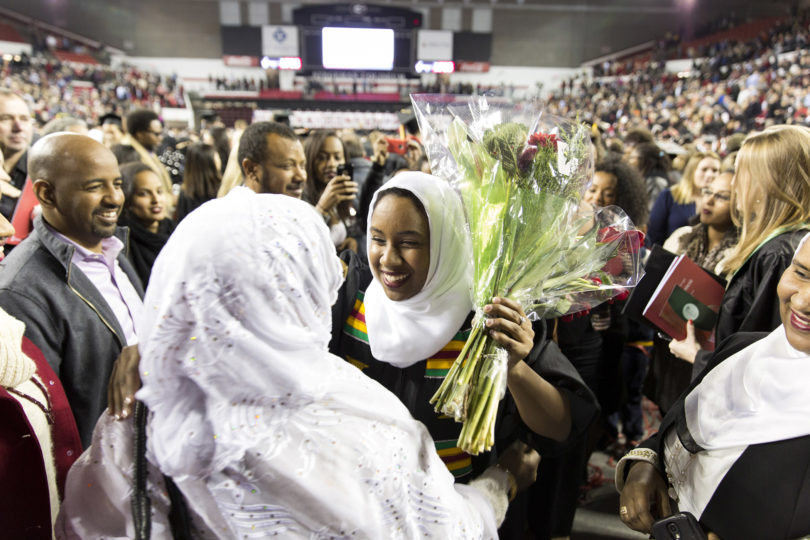 Lemi Abdolwahb celebrates with family members at the conclusion of the undergraduate Commencement ceremony.

The 2,355 eligible graduates for the fall Commencement ceremonies at Stegeman Coliseum Dec. 19 were challenged to make an impact on the world—even if through small gestures.

NASA physicist and UGA alumnus Roger Hunter, speaker for the undergraduate Commencement ceremony, drew inspiration from the first men on the moon and from a dedicated high school teacher to demonstrate the ways in which the UGA class of 2014 can make a difference.

Hunter, associate director for programs at the NASA Ames Research Center, used a visual aid to drive home his point about leaving a lasting impact. Using the big screen in Stegeman Coliseum, Hunter showed the audience a photo of Neil Armstrong’s footprints still on the surface of the moon more than 40 years after the Apollo 11 mission.

“Though many of us are unlikely to walk on the moon, or on Mars, we do walk this planet and we leave footprints in the lives of those we encounter,” Hunter said.

And then he asked the graduates, “When you leave here today, what footprints will you leave behind in the lives of others that will make a difference? To whom will you be a hero? Who came before you and was a hero for you, and helped you arrive here today?”

For Hunter, who leads the center’s small spacecraft mission and technology development programs as well as the NASA Ames Small Spacecraft Integrated Project Team, one of his heroes was in the audience at the Commencement ceremony.

Hunter said of his mentor, “He left footprints in my life, and the lives of so many other students.”

Robinson told graduate degree recipients at the afternoon ceremony in Stegeman Coliseum that he worked his way out of poverty to become a UGA professor in part from good parents and from personal hard work, but also thanks to a handful of people who helped guide and encourage him along the way.

Robinson credited a chemistry professor at Jacksonville State University, who took an interest in Robinson, for helping guide him toward his chosen field. Another professor at the University of Alabama helped him realize that graduate school was a possibility.

Robinson asked graduates to take the time to become a mentor to someone too.

“I urge you to take the time to reach out to young people, students or a colleague,” he said. “Within these personal interactions, I believe, arise miraculous possibilities.”

The student speaker at the undergraduate ceremony was Robert Davis Mastin of Atlanta, who earned dual bachelor’s degrees in finance and marketing.

Mastin offered some practical advice to his peers, encouraging them not to get too hung up on their momentous years as UGA students. Instead, he encouraged his classmates to begin working toward their future now by taking risks and carving out concrete goals.

“Let’s embrace the next chapter of our lives rather than allow uncertainty to cripple us,” he said. “Let’s make a difference rather than cling on to vague hopes.”