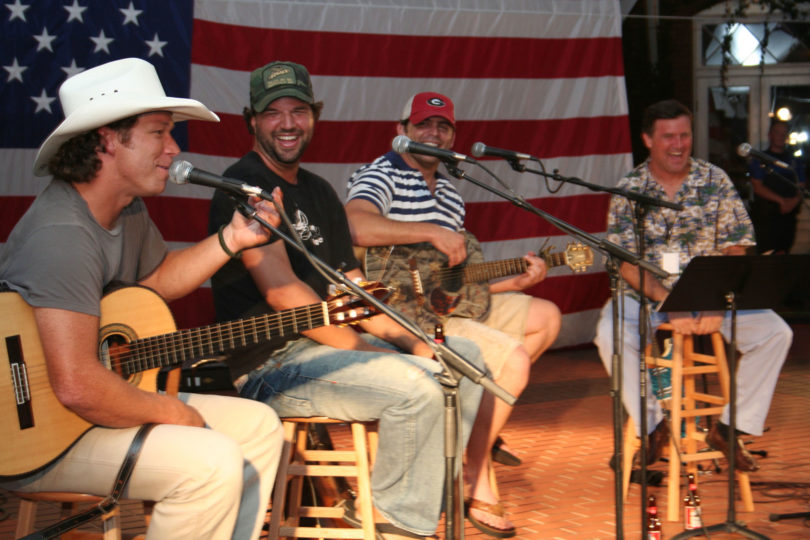 On a recent night in Gainesville, Bruce Burch, director of the Music Business Program in the Terry College of Business, took center stage to pay tribute to a fellow songwriter and UGA alumnus.

“I just want to thank everyone. I know John would be blown away to see you all here,” he said to a crowd of about 2,000 packed onto the lawn at the Smithgall Arts Center. Then he joined founding members of Alabama and several current country hit makers in a chorus of “Be Young, Be Foolish Be Happy,” in honor of his longtime friend.

Sing-alongs are typical of the Bruce Burch and Friends Honor John Jarrard Concert, an annual songwriters’ showcase held in the UGA graduate’s memory.
In all, Jarrard wrote or co-wrote 11 No. 1 hits for artists like George Strait, Reba McEntire and Alabama.

The concert allows songwriters to take their turns singing their compositions under the bright lights and share insight into one of the industry’s least-understood occupations.

“When I was a kid, I didn’t know what a songwriter was,” Burch said. “Nowadays, you kind of have a better idea, but I don’t think most people know who they are.”

For many, the concert is a night to hear stories about their favorite country hits told by the people who wrote them, but for Burch, it’s a chance to remember his friend.

Diabetes took an early toll on ­Jarrard, who suffered leg amputations and the loss of his eyesight after moving to Nashville in 1977. But Jarrard’s  troubles never eroded his spirit, Burch said.

“For him, the disease made his choice about whether to stay in Nashville a lot easier,” said Burch, who knew Jarrard since childhood. “He knew that songwriting was something he could still do without his eyes.”

After finding success on their own, Burch and Jarrard started hosting annual concerts in their hometown to benefit Gainesville High School, which they attended.

After Jarrard’s death in 2001, Burch decided to continue their tradition, dedicating the event to Jarrard’s memory and donating proceeds to the John Jarrard Fund, which contributes the money to community causes in Northeast Georgia.

Since it’s inception, the concert has raised more than $300,000 through ticket sales and auctions.

It’s also an opportunity for up-and-comers to find an audience or a tutor, as recent UGA student Matt Moore, who performed at the concert, can attest.

“This is my first time here, but I’ve heard about it before,” said Moore. “Exposure like this is really great, and all the guys are really nice and helpful with your career.”