Jose Cordero is the Gordhan and Jinx Patel Distinguished Professor of Public Health and head of the department of epidemiology and biostatistics.

University of Georgia professor Jose F. Cordero has been awarded the 2017 Sedgwick Memorial Medal for Distinguished Service in Public Health, the oldest and most prestigious award bestowed by the American Public Health Association.

An international leader in infant and maternal health, Cordero will be honored for his “remarkable record of service in the advancement of public health knowledge and practice” at the association’s annual meeting in Atlanta on Nov. 7.

Cordero is the Gordhan and Jinx Patel Distinguished Professor of Public Health and head of the department of epidemiology and biostatistics in UGA’s College of Public Health, where he mentors graduate researchers in infectious disease studies and infant and maternal health.

“Dr. Cordero has positively impacted millions over the course of his career not only through his scholarship and practice, but also by teaching and mentoring the next generation of global health practitioners,” said UGA President Jere W. Morehead. “I commend him on his achievements and on his receipt of this singular distinction.”

Originally trained as a pediatrician, Cordero has dedicated his career to addressing maternal and child health as well as minority health and health disparities. His many contributions to public health include identifying nutritional deficiencies of infant formula, advocating for nutrient fortification in corn and flour to prevent neural tube defects in Hispanic children, promoting child immunizations in the U.S. to eliminate measles, mumps and rubella, and championing early diagnosis for children with autism.

For 27 years, Cordero served at the Centers for Disease Control and Prevention, where he focused on improving the health of mothers and children. His most prominent roles were deputy director of the National Immunization Program and founding director of the National Center for Birth Defects and Developmental Disabilities. In the U.S. Public Health Service, he attained the rank of assistant surgeon general.

“The College of Public Health was very fortunate to recruit Dr. Cordero,” said Phillip L. Williams, dean of the college. “He is an inspiration to our faculty and students in public health, and it is an honor to know him as a colleague.”

Cordero currently co-directs the Puerto Rico Test site for Exploring Contamination Threats (PROTECT) Center as well as the Center for Research on Early Childhood Exposure and Development (CRECE), both of which examine how exposure to environmental contaminants contributes to the high rate of preterm birth in Puerto Rico. 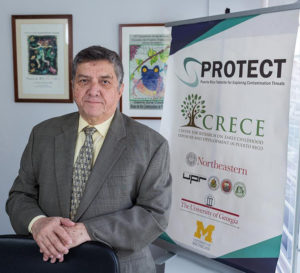 José F. Cordero has dedicated his career to addressing health disparities and the health of mothers, children and minorities.

At the advent of the Zika epidemic in 2015, the PROTECT Center was poised to assist the CDC with Zika surveillance and prevention efforts in Puerto Rico, and Cordero regularly flies there to check on expectant mothers at risk for preterm births or contracting the Zika virus.

“At the outbreak of the Zika virus threat, he was the first to organize a conference with physicians and other health professionals to educate them and implement plans for managing the threats of Zika for people in Puerto Rico,” said Carmen Velez-Vega, an associate professor of social sciences at the University of Puerto Rico Graduate School of Public Health and principal investigator with the PROTECT and CRECE programs. “In my opinion, Dr. Cordero talks the talk and walks the walk.”

Cordero is a former national trustee of the March of Dimes Foundation, a nonprofit organization that works to improve the health of mothers and babies, and he is a longtime member and past president of the Teratology Society, an international and multidisciplinary group of scientists who study birth defects, reproduction and disorders of developmental origin.

“Throughout his career, Dr. Cordero has been a dedicated and passionate teacher, mentor and leader in public health,” said Dr. Hani K. Atrash, director of the Division of Healthy Start and Perinatal Services within the Maternal and Child Health Bureau at the U.S. Health Resources and Services Administration. “He has touched and affected the lives of hundreds of public health workers in the United States and globally, including my own.”

“Dr. Cordero’s record of accomplishment underscores his unwavering commitment to helping people lead healthier lives,” Whitten said. “His students go on to make significant contributions of their own, resulting in a far-reaching, world-changing impact.”

I’m honored for this recognition and in awe for the many distinguished heroes of public health that have been recognized with this award. — Jose Cordero

The APHA notes that the Sedgwick medal is “a true accolade of the profession-the recognition by an individual’s colleagues of outstanding accomplishments in the field of public health.”

“I’m honored for this recognition and in awe for the many distinguished heroes of public health that have been recognized with this award,” said Cordero. “Public health work requires a community, and this recognition goes to the many wonderful colleagues that I have worked with during my career.”

The award was established in 1929 in honor of William Thompson Sedgwick in recognition of his service and advancement of the public health field. Sedgwick was president of APHA in 1915 and led the department of biological and public health at Massachusetts Institute of Technology until 1921.