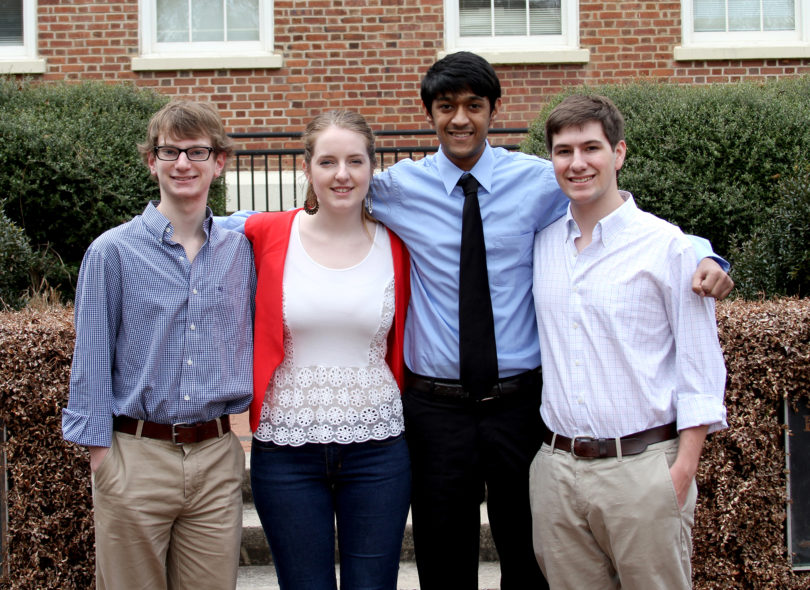 For the 25th consecutive year, the UGA debate team has qualified for the National Debate Tournament. At the district competition held in late February at Emory University, UGA qualified two teams-the maximum number available to any university-to the season-concluding national championship, which will be held from March 28 to April 1 at Indiana University.

Only 80 teams from a pool of a few hundred from across the country qualify for the National Debate Tournament. Shanker, the UGA team president, estimates he typically puts in 20 hours a week of research and preparation-with weeks before tournaments sometimes far exceeding that number.

“As a part of our debate experience, I’ve learned about the various intricacies of our immigration system, energy policy, foreign democratic aid and presidential war powers, to name just a few of the topics we research and debate,” he said. “Collegiate debate is also incredibly fun. From playing Frisbee outside Phi Kappa to our yearly trip to California, it has been an extremely memorable part of my UGA experience.”

That UGA has been able to qualify teams to the National Debate Tournament 25 years in a row is a significant accomplishment for the debate program. Success in debate tends to favor elite private institutions, with major public research institutions typically succeeding only intermittently, said Edward Panetta, director of the Georgia Debate Union. UGA is one of a handful of public institutions that competes on equal footing with traditional debate powers.

“It is a testament to generations of committed undergraduate debaters and a dedicated coaching staff that UGA has been able to achieve this degree of success and longevity,” said Panetta, who is a professor in the communication studies department of the Franklin College of Arts and Sciences. “UGA will now set its sights on the national championship and the future looks bright, as three of the students UGA we will be sending to Indiana are set to return to the squad next fall.”