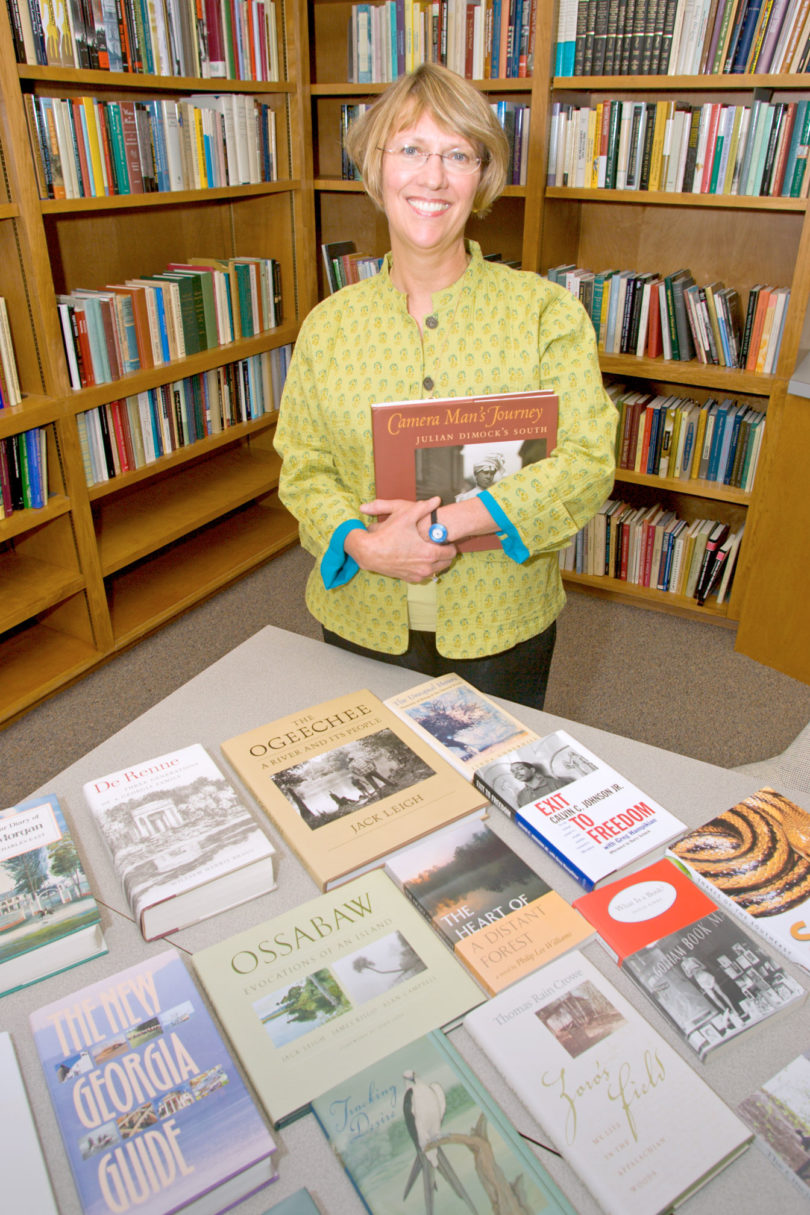 When a book is well designed and beautifully packaged, the object itself can be elevated to a work of art complementing and even enhancing an author’s writing. Sandra Hudson has crafted exceptionally well-designed books for the University of Georgia Press for 25 years. Later this month, after a 36-year career, Hudson will retire.

“Sandy’s work has been key in building the reputation the Press enjoys today,” says Nicole Mitchell, Press director. “Her award-winning designs have given the Press a strong identity that is recognized regionally and nationally. In fact, many authors are drawn to publish with Georgia because of the Press’s strength in this area.”

Hudson studied art history at Hollins College where older classmates Annie Dillard, Lee Smith and Jill McCorkle would soon go on to become successful writers. But when offered two jobs after graduating, one with a publisher and one with a museum, Hudson made a choice that would lead to a career in books.

“Given my upbringing it’s not surprising I chose publishing,” says Hudson. “My mother had the greatest influence on me. Although she never finished high school, she read Shakespeare, Chaucer, Thoreau as well as poetry and books about religion. She was soulful and curious about many things. When she was hospitalized before her death, she had by her bed a field guide to wild mushrooms.”

Hudson’s early career landed her jobs at Winter House, Holt Rinehart Winston and the Curtis Publishing Co. She learned on the job and bought hundreds of books on typography, layout, graphic design and printing to learn more in her spare time.

Hudson says she felt exceedingly lucky when she was offered a job at UGA Press in 1980.

“It satisfied two desires-to work in publishing and to come back to my home state,” she says. “I’m a Columbus native, but some of my best memories are from my teenage years, visiting friends in Athens and going to the Athens Boat Club on Lake Lanier.”

When Hudson began at UGA, the Press was located in the basement of Terrell Hall and published roughly 35 books a year, less than half the number it publishes today in the building it occupies on Research Drive. Hudson was the sole designer and quickly advanced the staid designs-standard for university press books at the time-to a new level.

Like much design, Hudson says that book design is often taken for granted, even by avid readers. It can be a ­transparent art, but every choice-from typeface to paper selection to trim size to cover art-affects the reading experience.

“I believe our designs fit the nature of the books we publish and also reflect the character of our university,” she says. “I’m thinking, for instance, of the beautiful buildings on North campus, the neo-classical ideal, the fact that we are a Southern university. I think it’s safe to say the designs are traditional in the best sense of the word. We innovate within a time-honored tradition.”

Hudson and her staff of Walton Harris, Mindy Hill, Kathi Morgan and Erin Kirk New continue to produce this timeless design today and have won more than 100 awards for their work.

“I’ve been blessed with a very talented staff of designers and production coordinators,” Hudson says. “We’ve worked together for a very long time-from 10 to 24 years. I know they will carry on in a fine tradition.”

Hudson and husband, Cecil, a psychiatrist who serves as chief medical officer of Athens Regional Medical Center, plan to divide their time between Athens and McIntosh County. But those who know Hudson don’t expect she will settle down soon. She sings in a community choir that regularly travels abroad and is active with the Altamaha Riverkeepers, Georgia Conservancy and Friends of Sapelo Island. Hudson also seems to have inherited her mother’s innate curiosity.

“I’m a perpetual student, and there are many new things I want to learn,” she says. “I’ve recently become interested in making digital pinhole photographs through courses I’ve taken with Mary Ruth Moore. I want to learn to play some folk instruments I’ve collected. And of course I look forward to reading some of the many great books I’ve missed.”