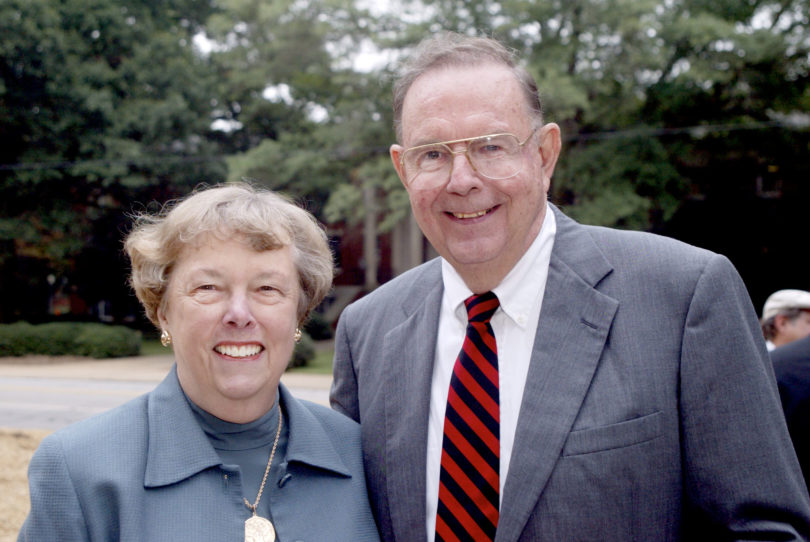 “Dianne Davison graced the University of Georgia with warmth, charm and dignity that earned her the affection and respect of everyone who knew her,” says UGA President Michael F. Adams. “She was a distinguished UGA alumnus who had the highest aspirations for her alma mater, and she worked tirelessly to strengthen the university. The entire university community joins me in extending prayers and deepest sympathy to the Davison family members and friends.”

A native of Chicago, Davison graduated from high school in Texas and met her future husband when both were students in UGA’s College of Veterinary Medicine. They both graduated in the spring of 1952 and were married the following September.

As a student, she was a member of Alpha Lambda Delta honor society and Kappa Kappa Gamma sorority and was editor of Southeastern Veterinary magazine.

After receiving their veterinary medicine degrees, Dianne and Fred Davison opened a veterinary practice in Marietta, Fred’s hometown. In 1958, the Davisons went to Iowa State University where Fred studied for his doctoral degree and Dianne worked as a researcher.

As the university’s first lady, Davison oversaw management of the President’s House, the historic 19th-century house where the Davisons lived with their three children, Rick, Bill and Anne. She also supervised the care of the extensive grounds and gardens around the house.

Known for her cordial and gracious manner, Davison was hostess for thousands of visitors who attended hundreds of events at the President’s House. Guests included state, national and international government leaders, diplomats, scholars, entertainers and other dignitaries as well as UGA faculty, staff and students.

She took pride in ensuring that guests enjoyed their visit to the house, once telling an interviewer, “I have a strong feeling that the important thing is to make people feel welcome. I want very much for my guests to feel that it’s not just another thing they’re attending. Cordiality is the most important factor.”

She also collected historical information on the President’s House and compiled a scrapbook that included photographs as it appeared over the years. She often personally led tour groups through the house, recounting its history and its antique furnishings and paintings.

While she strongly supported her husband’s initiatives and programs at UGA, she made a point of not trying to influence his decisions. “I do not impose myself on my husband’s career,” she told a reporter. “Some wives of university presidents are tempted to push their pet projects through their position, but I don’t think that’s completely fair.”

Nevertheless, Fred Davison often said it was his wife’s love and support-and the stable home life she provided him and their children-that enabled him to be a successful leader.

Mrs. Davison was active in the Athens community, holding membership in the University Woman’s Club, the Junior Garden Club, the Athens-Clarke Humane Society and the Athens Boys Club. She also served on the board of trustees of Athens Academy and on the Kappa Kappa Gamma house board.

In 1983 the UGA Alumni Society presented Mrs. Davison the Alumni Merit Award in recognition of her contributions to the university. As part of UGA’s bicentennial in 1985, she was awarded a sterling bicentennial medallion.

In 1986, the board of trustees of the University of Georgia Foundation adopted a resolution praising her for setting “a standard of excellence in character and intellectual leadership” and expressing “grateful admiration and highest praise” for her service to UGA.

In 1988, Dianne and Fred Davison moved to Augusta where Fred served as president and CEO of the National Science Center Foundation, a position he held until retiring in 2002.

On April 16, 2004, the Davisons came to UGA for the dedication of the Fred C. Davison Life Sciences Complex. Fred was instrumental in planning, designing and financing the $32 million, 257,000-square-foot structure that houses the genetics and biochemistry departments.

Funeral services for Mrs. Davison were held on Aug. 31 in Augusta. An interment service was held at Oconee Hill Cemetery in Athens.