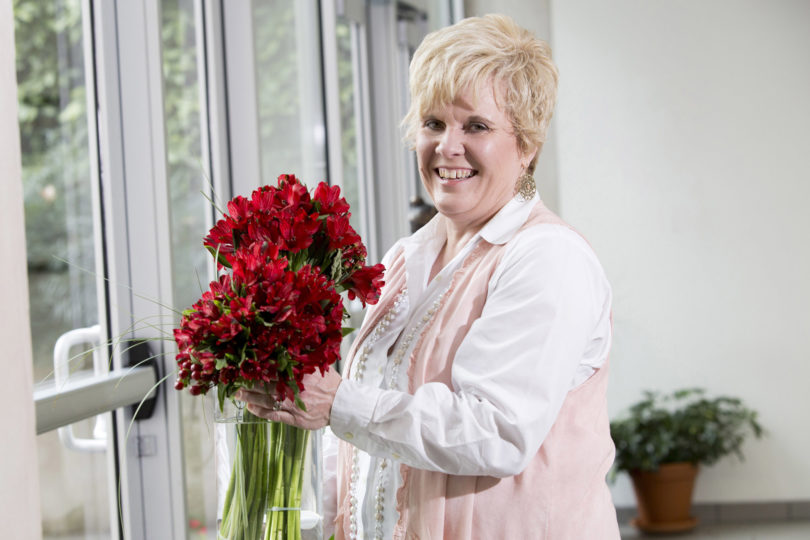 During her time at the School of Law

Each day is just a little bit different for Lisa Mathis.

As the School of Law’s director of special events, one day might include a portrait unveiling, and the next might include a reception honoring the Superior Court judges of Georgia. And Mathis often is thinking about the details of those events six months in advance.

“I love the organization of it, and I just really like our people,” she said. “For our events, you have to have a service heart to do them. You have to want to make people feel comfortable and make people happy. I like to say I ‘friendraise.’ ”

For Mathis, these events play an important role for the law school. Her work on them helps with budgets, and the events themselves build relationships with alumni. She also sees herself as a resource for faculty and staff.

Mathis started at the law school in 2002 in a temporary position that morphed into a full-time one. Jill Birch, who worked in special events and alumni relations for the law school at the time, quickly became her mentor.

“She taught me well,” Mathis said. “I was overwhelmed, but it was exciting. I could learn new things I hadn’t done before.”

Mathis previously worked as a secretary, and her position at the law school initially included record-keeping, check requests and “all the other things administrative people are challenged to do.” Birch’s husband was a salesman at the body shop where Mathis worked and suggested she apply for the open position in the law school’s special events office because he liked her work ethic.

Her work has varied from planning events to other duties like heading the redecoration of rooms in the law school.

“If you look around my office, you’ll see there are all kinds of little things,” she said. “People will come by and say, ‘Do you have birthday candles?’ Well, of course I have birthday candles. You never know what someone’s going to need, and I try to keep things available that make events work well for the law school.”

One of Mathis’ favorite parts of event planning is floral arranging. In fact, that’s often where she starts the planning process and settles on the theme for events. After deciding on the goal of the event, she works on budgets, locations, guest lists, invitations, menus and other details.

“It’s more than a day,” she said. “It’s six months ahead. One of the things people don’t realize is how much time goes into planning an event. You plan an event for six months, and it’s over in two hours.”

Mathis said her most memorable event was a gala she planned celebrating the 150th anniversary of the Georgia Law Review held at the InterContinental Hotel in Atlanta with guest speaker Justice Clarence Thomas. Her two favorite annual events are the law school’s Commencement activities, including a pre-graduation reception for friends and family of graduates held at the Grand Hall in the Tate Student Center, and a Homecoming barbecue for 700-800 guests on Herty Field.

“I always like to do something that’s unusual and something that has a ‘wow factor’ to it,” she said. “I want to make the law school look the best it can. I want alumni to walk in and know this is a special place.”

During her time at the law school, Mathis steadily worked toward a degree of her own. She started taking classes in 2002 and finished her bachelor’s degree in communications studies last year.

“It helps me communicate with people,” she said. “A lot of things transpired from this opportunity.”

One of the skills she worked on was public speaking. She’s always had an interest in politics and ran for county commissioner in Madison County in 2015 and has served on the Board of Electors.

In her spare time, Mathis is active at Athens Church, enjoys running and has an interest in zip-lining, skydiving and hang gliding.

“I’m looking for things to do in the second half of my life,” she said.