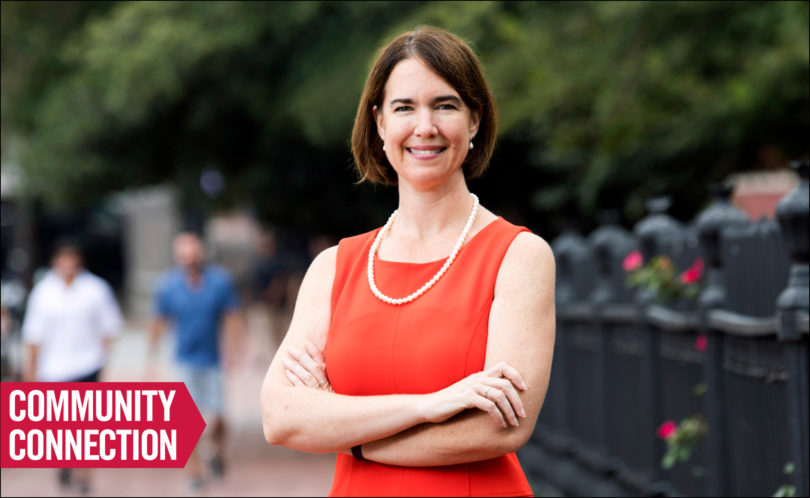 Alison McCullick finds ways to bring UGA and Athens-Clarke County together in new partnerships and programs.

Alison McCullick has a knack for bringing people together. And her position as director of community relations allows her to do just that for UGA and the Athens-Clarke County community.

“The university, being the largest employer in the community, plays an important role in Athens. But at the same time, the university benefits from this community,” she said. “We both have a vested interest in each other and grow stronger by working together.”

McCullick’s deep love for Athens started young—she grew up here before attending Furman University. She then spent two years working in intergovernmental affairs at the White House in former President Bill Clinton’s administration before returning to Athens to get her Master of Public Administration from UGA. McCullick then worked in state government for seven years before serving as the director of outreach and communications for the AU/UGA Medical Partnership. She joined UGA’s Office of Government Relations in her current position in January 2016.

“To me, community relations is about looking at those partnerships that currently exist and seeing how we might be able to enhance them as we move forward,” she said. “We are intertwined in many different ways.”

For McCullick, community relations isn’t just an 8 a.m. to 5 p.m. position. She’s always listening for input “from the ground,” whether that is attending a County Commission meeting or having a conversation with a neighbor at the grocery store. Her goal is to connect all members of the community with UGA and explore opportunities for collaborating on efforts that are important to residents, as well as students, faculty and staff.

One of the more recent programs McCullick helped coordinate is called North of the Arch. The partnership with the Athens Downtown Development Authority provided UGA freshmen with an opportunity to get to know downtown Athens. Held
Aug. 19, the event included stops everywhere from the Board of Elections office to local stores and restaurants.

“We’re hoping that we can catch students in their first year and say ‘Look at all the opportunities Athens has to offer,’ ” she said.

Other partnerships in which McCullick is involved include workforce development opportunities; events that provide engagement opportunities between Clarke County School District students, their families and the university; and promoting existing partnerships that local residents can participate in, such as Small Business Development Center classes, student-led service projects, and personal and family clinics, such as the Aspire Clinic. As part of her outreach, the Office of Community Relations recently launched an online presence highlighting opportunities for community members to take advantage of whatever their interests might be.

McCullick said what drives her is feeling like she’s helped someone and those moments when “you can tell that you helped a project move forward.”

Outside of her official position, McCullick looks forward to being involved in her daughter’s new school, Clarke Middle School; serves on the board of the Clarke County Mentor Program, which includes more than 250 UGA student mentors; sits on the Athens Rotary Club board; and serves on the St. Mary’s Foundation board. She enjoys reading, traveling with her family and running, having participated in the AthHalf half marathon three times.

“I never thought I’d end up back in my hometown,” she said, “but I wouldn’t trade it for anything at this point.”