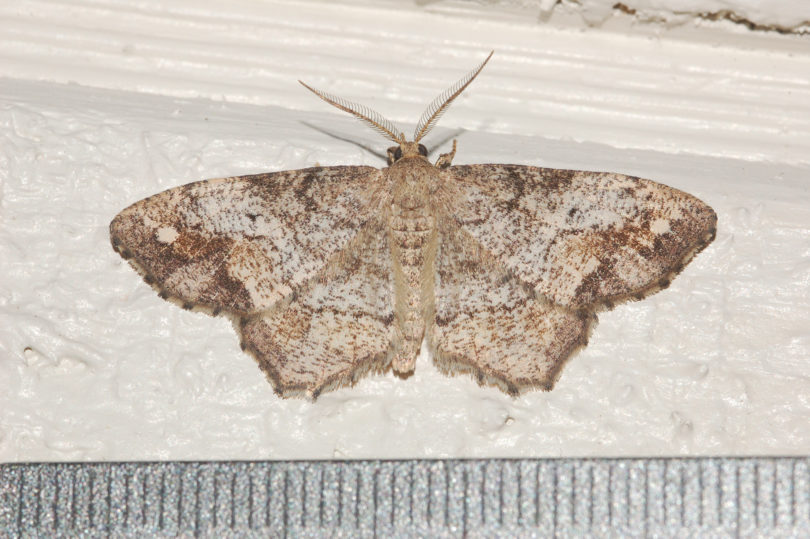 Athens, Ga. – If University of Georgia ecologist John Pickering has his way, mothing soon will become as popular as birding, a pastime 48 million Americans enjoy annually, according to the U.S. Fish and Wildlife Service.

Pickering is working to start the mothing trend in Athens, where a new moth observatory opened at Sandy Creek Nature Center in April.

An associate professor in the UGA Odum School of Ecology, Pickering is the founder of Discover Life, an organization that promotes science education through public participation in research. He and Discover Life interns have been collecting data on moths in Athens nightly for the past three years, amassing more than 74,000 digital photographs of moths. Of those, 71,000 have been identified to the species level, yielding a total of 925 different moth species.

One of those Discover Life interns, UGA undergraduate Tori Staples, wanted to expand the project to encourage the general public to get involved, both as a way to teach people about science and to increase the amount of data about moths. She came up with the idea to establish the mothing site as part of an entomology outreach and service-learning class.

With funding from the UGA College of Agriculture and Environmental Sciences, she and Discover Life partnered with the Athens-Clarke County Department of Leisure Services to install the observatory at Sandy Creek Nature Center, already the site of numerous community environmental education activities.

“Why in the world are we studying moths—and insects—in the first place?” Staples said. “For one thing, we want to know what our insect communities are going to do in response to a changing climate. Insects can be affected in many ways. We’re watching this community of moths and we’re seeing how body size, for example, is changing across temperatures. Maybe we can extrapolate or guess at what other insects are going to do in response to changing temperatures.”

The observatory itself is simple: A mercury vapor lamp and some porch lights shine onto large white squares painted onto the walls of Walker Hall. Moths are attracted to the light and land on the walls, where they’re easy to spot. Participants are instructed first to photograph their cell phones to capture the exact time, date and location of their mothing expedition. They then photograph moths with a ruler placed nearby to document each specimen’s size.

The photographs are uploaded to the Discover Life website, where they’re automatically tabulated and graphed. Discover Life interns use the photos to identify the moth species.

Pickering said he hopes a wide range of people will take to mothing.

“I’m hoping this gets the community involved,” he said, adding, “Come down, and we’ll teach you how to do it. Bring other people, tell them about it, get them involved. You’ll get to learn about environmental ethics, environmental literacy, how to analyze data.

“We’re trying to instill real science in a community and show the rest of the world how to do it.”

DiscoverLife.org, the group’s interactive website hosted at UGA, allows people from across the world to contribute data about all manner of living things, uploading digital photographs that become part of an online encyclopedia of biodiversity. The information is useful for scientists studying global-scale problems that require large amounts of data—questions such as how living things might respond to changing climate, pollution or invasive species.