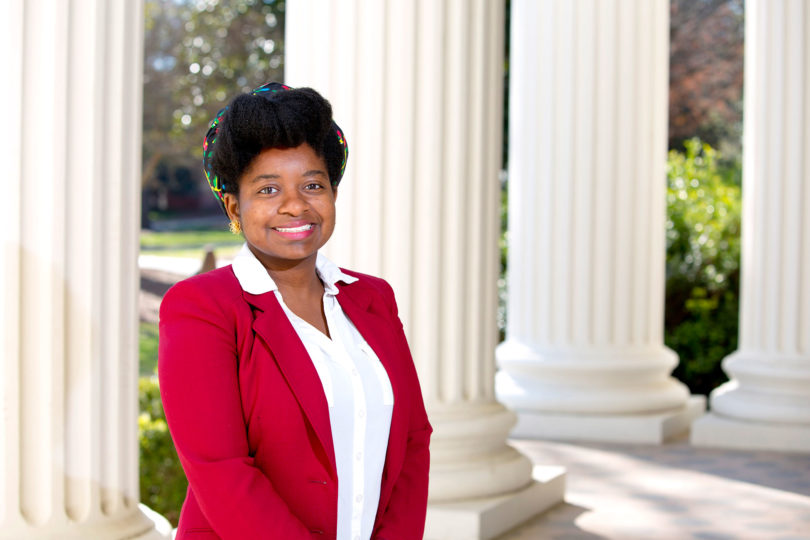 Elizabeth Louis is a member of more than six organizations and is pursuing a doctorate in counseling psychology.

A student, a graduate assistant, a therapist and a leader: Elizabeth Louis wears many hats in the UGA and Athens communities.

Currently a member of more than six organizations, Louis is pursuing a doctorate in counseling psychology at UGA’s College of Education after earning a bachelor’s degree in psychology and a master’s degree in mental health counseling from Georgetown University and Boston College, respectively.

A 2017 recipient of the President’s Fulfilling the Dream Award, Louis said that she respects Martin Luther King Jr.’s vision of equality and faith.

“Faith was always at the center of all his movements, whether through prayer or references about God,” said Louis, who admires how King united people of all faiths, backgrounds and socioeconomic statuses while staying true to his own beliefs and values.

“It’s about recognizing how to bring everyone to the table,” she said, “and pursuing equality, justice and a serving spirit for others.”

Louis, whose parents immigrated to the U.S. from Haiti in the late 1980s, is the oldest of five children and the first in her family to attend college. Following in Louis’ footsteps, her three brothers and one sister have graduated from or are now attending college in Houston and Miami.

Louis said it is important for people to recognize their own privileges so that they can ultimately combat injustice.

“I may be indirectly contributing to some inequalities if I don’t speak up,” she said.

In addition to being a doctoral candidate, Louis works in UGA’s Office of Institutional Diversity as a graduate assistant. There, she supports the office with campus-wide diversity initiatives such as the certificate program on diversity inclusion. She also assists with developing and implementing programs for students, staff and faculty to enrich their experiences at UGA while supporting their personal and professional growth.

She also is a member of the mental health committee for the university’s Graduate and Professional Scholars where she organizes events to provide ethnic minority students with a place to address issues they face both on and off campus while creating a welcoming community.

In addition, she is a therapist at Grady Memorial Hospital in Atlanta, working with homeless and low-income populations who struggle with depression, trauma and other mental health issues.

Louis is also a campus representative for the American Psychological Association of Graduate Students. As a part of APAGS’ Advocacy Coordinating Team, Louis encourages students in the university’s counseling psychology program to be advocates in the community. She also shares information about how they can get involved.

When she isn’t busy with school, volunteering or working, Louis hosts potluck meals with friends, goes on road trips to Washington, D.C., Miami and Houston; visits countries such as Haiti, Canada, Italy, Japan and Cuba; and keeps in touch with family and friends in Haiti via Skype.

After receiving her doctorate, Louis plans to become a psychologist and run mental health training programs and carry out disaster relief work. She hopes to work internationally in Haiti or other developing countries.