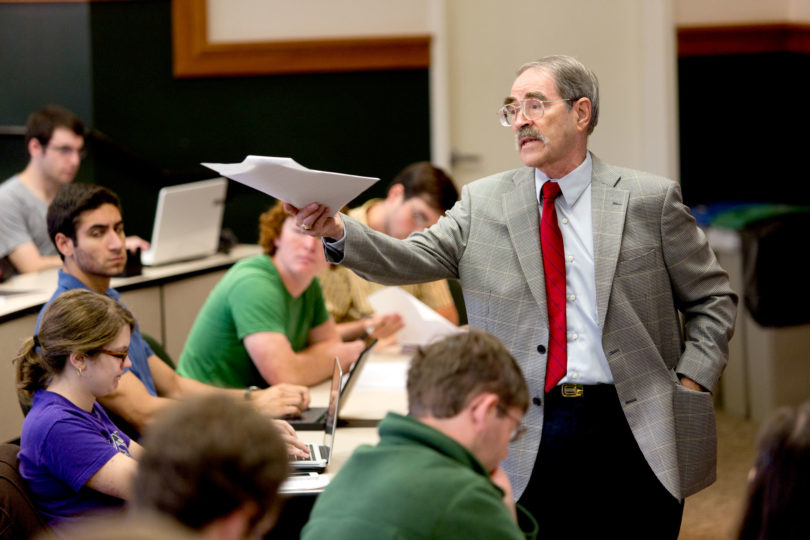 Charles Bullock has become the “go-to” guy for a quote for some political reporters. He makes the time to talk to journalists because he sees it as a way to teach beyond the classroom.

With election season in full swing, there are those who seek out political news stories and certainly those who try to avoid them.

If you’re one of the former, there’s a good chance you’ve seen Charles S. Bullock’s name in one of those stories.

Bullock, the Richard B. Russell Professor of Political Science in the School of Public and International Affairs and Josiah Meigs Distinguished Teaching Professor, is one of the most oft-quoted UGA faculty members in the political pages of newspapers.

With an expertise in Southern and legislative politics, Bullock regularly fields calls for interviews before and after elections and during legislative sessions by reporters from outlets around the state from the Athens Banner-Herald to the Atlanta Journal-Constitution, as well as national news sources like The New York Times, The Wall Street Journal and The Washington Post.

He’s asked to comment on political trends, voter demographics and even predict the outcome of races.

For Bullock, like other established political science faculty who frequently interact with the media, being an expert source to the media is just an extension of his job as an educator.

“I think it’s an important aspect of what I do,” he said. “Yeah, I’m a classroom teacher, but one quote that appears in the AJC will reach far more people than I will reach in a classroom in maybe a decade—maybe more than that if it gets picked up by the wire service.”

Bullock, a UGA faculty member for 42 years, has built an impressive, if focused, resumé, including authoring a number of books and being named one of the 100 most influential Georgians by the editors of Georgia Trend magazine. That’s impressive considering Bullock initially went to college wanting to  major in physics; he also put in a year at law school before settling on political science as “a natural choice” for him.

Since then, Bullock has been teaching in the classroom and beyond.

But when it comes to his frequent appearance in the paper, Bullock downplays the reason reporters seek him out.

With reporters often facing tight deadlines, Bullock is known as a reliable source to offer a quote before the story is due.

Given his extensive experience studying and teaching politics, Bullock’s popularity among journalists goes beyond picking up the phone.

He has been an impartial witness to the evolution in Southern politics from a region dominated by Democrats to the swing toward current control by the Republicans. The professor has closely studied this phenomenon and has written or edited several books on the subject.

Whether through books, lectures or a news quote, Bullock serves as the educated observer in his field, explaining the latest trends to classrooms and the public at large.

“For most folks, the last time they’re going to study politics may be when they’re seniors in high schools, maybe as freshmen or sophomores in college taking an American government class,” he said. “So they’re going to spend the rest of their lives trying to make sense of the changing political scene. Political scientists have the opportunity to help them understand what they’re seeing.”