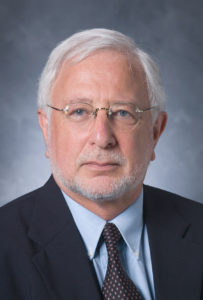 Alan Covich, a professor in the Odum School of Ecology, has been named a Fellow of the Society for Freshwater Science in recognition of his contributions to stream ecology.

Covich studies biodiversity and ecosystem processes and the impacts of disturbances, both natural and human-caused, in temperate and tropical stream ecosystems. He is particularly interested in how migratory species navigate stream networks in the wake of these disturbances.

The Society for Freshwater Science is an international scientific organization dedicated to promoting understanding of freshwater ecosystems and ecosystems at the interface between aquatic and terrestrial habitats. Founded in 1953 as the Midwest Benthological Society, SFS now has nearly 1,800 members from around the world.