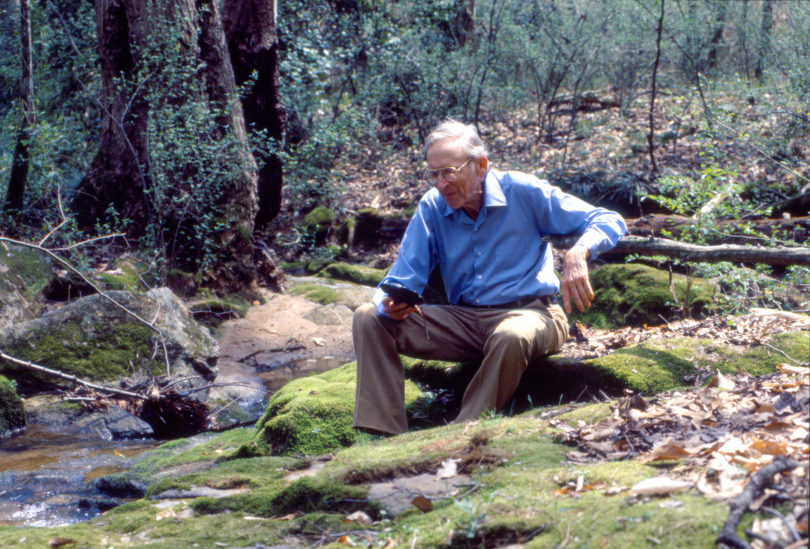 The Odum School of Ecology will host a celebration in honor of the 100th birthday of its founder and namesake, Eugene P. Odum (1913-2002), Sept. 17 from 3-5 p.m. in the ecology building. Cake and ice cream will be served. All are welcome to attend but are asked to RSVP to Lee Snelling at snelling@uga.edu by Sept. 10.

The program will include a welcome from John Gittleman, dean of the Odum School, and remarks by Betty Jean Craige, University Professor Emerita of Comparative Literature and Director Emerita of the Willson Center for Humanities and Arts. Craige is the author of Eugene Odum: Ecosystem Ecologist and Environmentalist, published by the University of Georgia Press in 2001. Craige’s remarks will be followed by a panel discussion, “Ecology: The Last and Next 100 Years.”

A short film, A Celebration of the Life of Eugene P. Odum, which documents Odum’s 2002 memorial service, will be shown after the panel discussion.

Odum is often referred to as “the father of modern ecology” for his pioneering contributions to ecosystem ecology and for promoting the ecosystem concept throughout academia and to the general public.

Odum joined the faculty of UGA in 1940 as a professor of zoology, where he focused his early efforts on establishing the science of ecology as its own discipline. During his tenure at UGA, he penned the influential textbook, Fundamentals of Ecology. He started the Georgia Marine Biological Laboratory—later known as the UGA Marine Institute—on Sapelo Island and the Savannah River Ecology Laboratory in the 1950s. In 1967 he established the Institute of Ecology, which became the Odum School in 2007.

Among his honors were the Crafoord Prize—often called the equivalent of the Nobel Prize for ecology—which he shared with his brother Howard T. Odum, and membership in the National Academy of Sciences.

As part of the centennial celebration, the Hargrett Rare Book and Manuscript Library has organized a special exhibit of Odum’s papers, journals, photographs and other memorabilia. It will be on display in the Richard B. Russell Building from September through December.