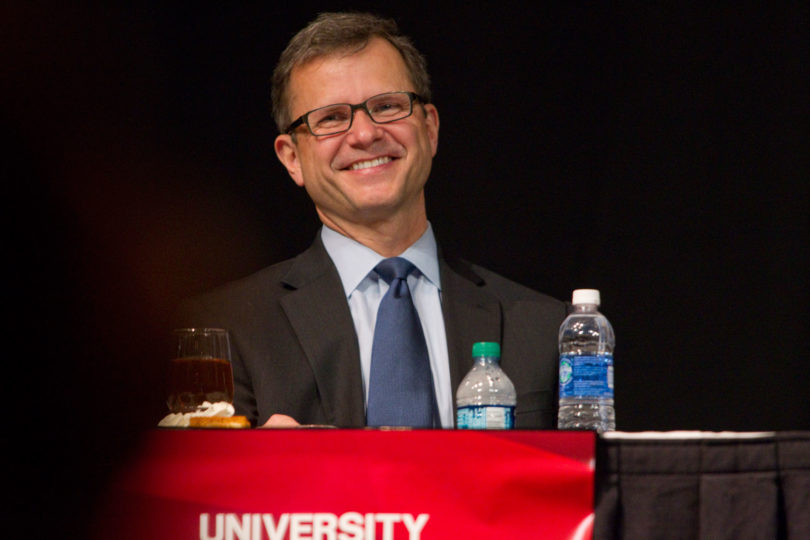 As part of his economic report

Georgia’s economic growth is on track to outpace the national average in 2013.
That was the message delivered by Robert T. Sumichrast, dean of UGA’s Terry College of Business, at the 30th annual Georgia Economic Outlook on Nov. 29 in Atlanta.
“There are two main reasons for Georgia’s improvement relative to the country,” Sumichrast said. “First, the massive restructuring of the state’s private sector is now complete. Our real estate bubble is in the past. The second reason is the opening of several large relocation and expansion projects, which will provide a tail wind to Georgia’s economic growth.”
The Georgia Economic Outlook series, which travels to 12 cities across the region, will come to Athens on Jan 23.
According to the forecast, prepared by the Selig Center for Economic Growth, the state’s gross domestic product will rise by 2.1 percent-better than years past but still modest. Comparatively, the national economy will grow by 1.8 percent.
But it’s not all good news.
Georgia suffered disproportionate job losses during the Great Recession and has recovered more slowly than the nation as a whole, Sumichrast said.
All the state’s new jobs will all come from the private sector. The public sector will continue to lose jobs for the next 10 years as the state and local governments continue adjusting to doing more with less.
“The problem is not that we are doing worse. On many measures, we are doing better than we did in the past. The challenge is that our competition in both the developed and the developing world is improving faster than we are,” Sumichrast said. “A poorly educated workforce puts Georgia at a competitive disadvantage with other states and nations when it comes to recruiting companies. That problem is especially bad when it comes to high-paying, high-technology companies.”